Braves break through in 10th for win over Rockies 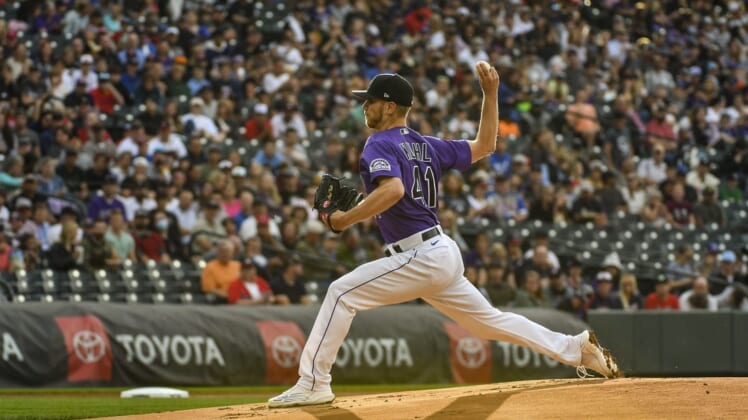 Adam Duvall scored on a wild pitch in the 10th inning and Matt Olson added a two-run single to fuel the Atlanta Braves to a 3-1 victory over the Colorado Rockies on Friday in Denver.

In a scoreless game, Carlos Estevez (1-2) uncorked a wild pitch with one out in the 10th inning to send designated runner Duvall to third base.

Ronald Acuna Jr. walked and Dansby Swanson was hit by a pitch to load the bases before Estevez sent another pitch past catcher Elias Diaz, allowing Duvall to score the game’s first run.

Atlanta loaded the bases again before Olson slapped an 0-2 pitch from Lucas Gilbreath to left field, plating both Acuna and Swanson.

The late uprising made a winner out of A.J. Minter (1-0), who struck out two in the ninth inning after Max Fried scattered two hits and a walk while fanning four over the previous eight.

Kenley Jansen allowed a one-out RBI single to Yonathan Daza in the bottom of the 10th before he securing his 13th save by striking out Ryan McMahon to end the game.

Swanson collected three hits and Acuna added two to send the Braves to their season-high third straight victory. Atlanta’s Austin Riley, however, went 0-for-3 with two walks to end his 11-game hitting streak.

Colorado’s Connor Joe extended his on-base streak to 30 games with a single to lead off the fourth inning, but Brendan Rodgers went 0-for-4 to snap his hitting streak at 20 games.

The Rockies mustered only three hits en route to losing for the 18th time in their past 25 games.

Atlanta tried to gain the early advantage against Chad Kuhl by putting runners on the corners with no outs in the first inning. Acuna, however, was thrown out at home on a double-steal attempt, and Travis d’Arnaud flied out with the bases load to end the inning.

Randal Grichuk recorded Colorado’s second hit of the night when he doubled to lead off the sixth inning. He advanced to third on Joe’s groundout, but Charlie Blackmon flied out to end the threat.