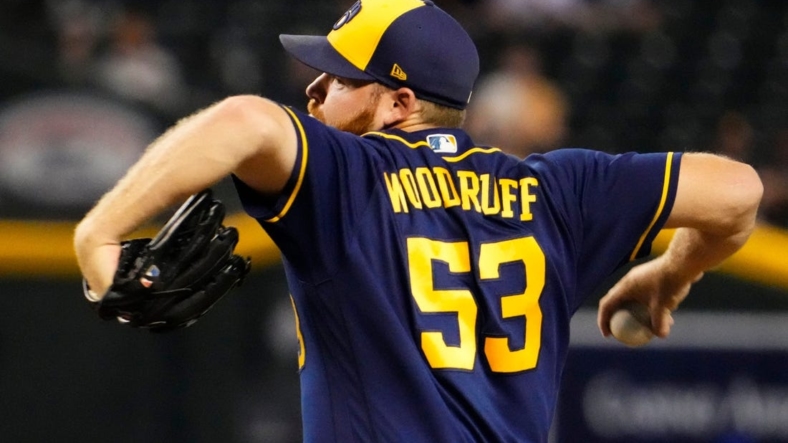 The Milwaukee Brewers appeared to look to the future instead of the present when they dealt closer Josh Hader to the San Diego Padres at the trade deadline.

Despite that move, Milwaukee is still within striking distance of the third and final National League wild card with a month remaining in the season.

The Brewers helped themselves with a 6-4 win over the Colorado Rockies on Monday afternoon in the first of three games in Denver. Milwaukee will send Brandon Woodruff (9-4, 3.54 ERA) to face Chad Kuhl (6-8, 5.19) on Tuesday night in the second game of the series.

Woodruff has pitched well since coming off the injured list on June 28 after recovering from a sprained ankle and a circulatory issue with his pitching hand. The right-hander has gone 4-1 with a 2.80 ERA in 12 starts since returning to the rotation, but he lost his last outing 5-0 to the Diamondbacks on Thursday.

In his four career starts against Colorado, he is 1-1 with a 6.75 ERA. Woodruff beat the Rockies on July 23 after tossing six innings of one-run ball and striking out eight.

The Brewers’ lineup got a boost on Monday with the return of former NL MVP Christian Yelich. Yelich missed the last three games of the weekend series against the Diamondbacks due to a neck issue.

“He really was in bad shape Thursday night,” Milwaukee manager Craig Counsell said before Monday’s game. “But he came in better Friday, and that told us that we were pointed at (Monday) as the day.”

Yelich went 1-for-5 while playing left field in the matinee win.

While the Brewers got a star back, Colorado is without its starting shortstop. Jose Iglesias exited the opener of a Sunday doubleheader at Cincinnati with a left hand injury and hasn’t played since. Iglesias will undergo more tests on Tuesday.

While it is a blow to the Rockies, it does give younger players a chance to play. Alan Trejo started at shortstop on Monday while Sean Bouchard and Michael Toglia were also in the lineup.

Bouchard made his major league debut in June and was recalled again on Aug. 30. He hit his first career home run on Friday against the Reds, and he is batting .235 (4-for-17) in six games since returning to the majors.

“We wanted to look at him in the big leagues,” Colorado manager Bud Black said. “Our player-development staff mentioned his name over the course of the season.

“When we called him up, he was in a good spot as far as his at-bats and confidence. It’s sort of carried over. That’s key.”

The Rockies hope Kuhl can turn things around for the team. Colorado has lost nine of its last 12 and is winless in its past four series.

Kuhl, who is 0-1 with a 5.59 ERA in two starts since returning from a right hip flexor strain, will be facing a familiar foe. On Thursday at Atlanta, he gave up three runs on five hits in 4 2/3 innings during a 3-0 defeat.