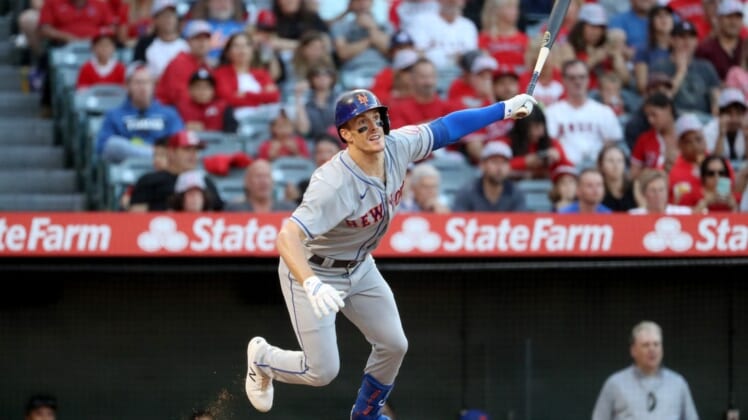 Brandon Nimmo homered, doubled and drove in three runs to lead the New York Mets’ 13-hit attack in a 7-3 victory over the Los Angeles Angels on Friday night in Anaheim, Calif.

Mark Canha, Eduardo Escobar and Jeff McNeil also had two hits apiece for the Mets, who are nearing the end of a 10-game West Coast road trip. Friday’s win gave them four wins in eight games against the Dodgers, Padres and Angels.

David Peterson (3-0) was one of six New York pitchers to keep the Angels’ hitters in check, other than Brandon Marsh, who drove in all three Angels runs with two homers.

Tylor Megill was activated from the injured list after a biceps injury to make the start for the Mets, and he gave up two runs on five hits and one walk in 3 1/3 innings, striking out four and making 64 pitches.

Angels left-hander Jhonathan Diaz (1-1), called up from Triple-A Salt Lake and beginning his second stint with the big league club this season, didn’t fare as well this time around. In two prior starts, he threw 9 2/3 combined scoreless innings. But the Mets got to him early and knocked him out of the game in 1 2/3 innings.

He got a double play in the first inning that got him out of trouble, but wasn’t so fortunate in the second. Tomas Lido had an RBI single and Canha drove in two with a bases-loaded double for a 3-0 Mets lead and an early exit for Diaz.

The Angels got two runs back in the bottom of the second on Marsh’s first home run of the game to cut their deficit to 3-2.

Nimmo’s solo homer in the fourth made it 4-2, and it stayed that way until the sixth when Nimmo drove home two more runs with a double and Canha added an RBI single.

Marsh got the Angels to within 7-3 with his solo homer in the bottom of the sixth.