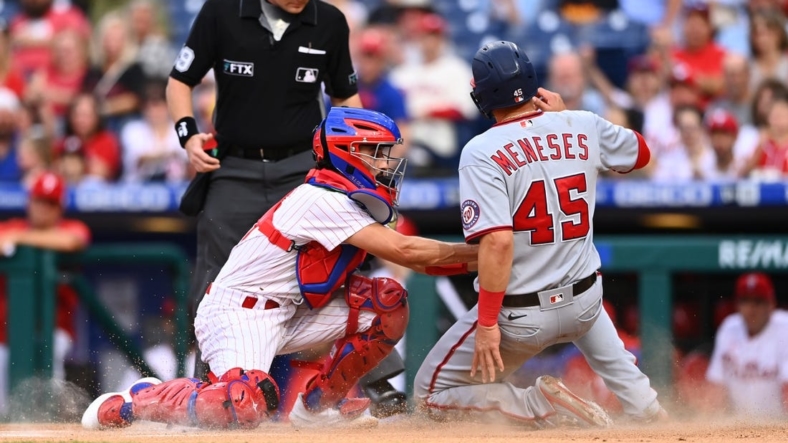 Brandon Marsh came a triple shy of the cycle and drove in two runs to lift the host Philadelphia Phillies past the Washington Nationals 8-5 on Saturday.

Bryce Harper and Nick Maton each homered and knocked in two runs for the Phillies (77-62), who won their second in a row in this series. Kyle Schwarber also blasted a solo homer and doubled.

Phillies starter Ranger Suarez (9-5) tossed 6 2/3 innings and gave up seven hits and four runs with four strikeouts and one walk.

Joey Meneses hit a home run, double and had two RBIs for the Nationals (49-91).

Lane Thomas contributed three hits and two RBIs for Washington, which has now dropped four of its last five. The Nationals loaded the bases with two outs in the ninth, but Nelson Cruz struck out to end the game.

Ildemaro Vargas also had two hits and an RBI for Washington.

Nationals starter Erick Fedde (6-10) lasted only 3 2/3 innings and allowed five hits and four runs to go along with four walks and one strikeout.

The Nationals went ahead 2-0 in the third inning when Meneses lofted a two-run homer over the wall in left field.

In the bottom of the third, Harper responded with a two-run blast to left, his first homer since returning from a two-month stint on the injured list with a broken left thumb. In the fourth, Edmundo Sosa added an RBI groundout and Marsh hit an RBI double for a 4-2 advantage.

Maton ripped a two-run homer in the fifth and Marsh added a solo home run in the sixth for a 7-2 edge.

Cesar Hernandez opened the seventh with a leadoff walk and Vargas followed with an RBI double. Thomas added an RBI single, and the Nationals trailed 7-4.

Luke Voit singled to open the eighth, but Sam Coonrod retired the Nationals in order from there.

Schwarber crushed a 457-foot home run to center in the eighth for an 8-4 lead. It was Schwarber’s 37th homer of the season.

In the ninth, Thomas produced an RBI single off Connor Brogdon to close within three runs.