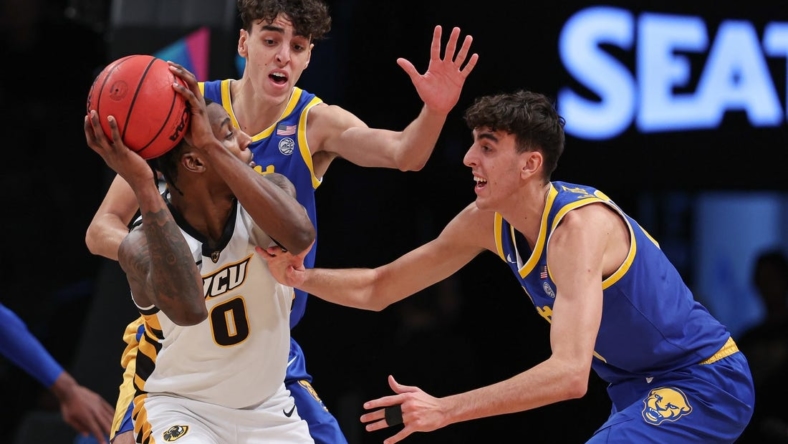 Brandon Johns Jr. scored nine of his 18 points in the final three minutes as Virginia Commonwealth grinded out a 71-67 victory over Pittsburgh Thursday night in the Legends Classic in Brooklyn, N.Y.

Zeb Jackson added 16 points, including five from the free throw line in the final 1:22 as VCU (3-1) captured the third-place game.

The Rams trailed by five points with four minutes left but went on an 11-2 run fueled by Johns. Jayden Nunn added three free throws as VCU defeated its former coach Jeff Capel. In his first head coaching job, Capel went 79-41 at VCU in 2002-06.

It was the third straight loss for Pitt (1-3), which was led by Blake Hinson, who scored 14 of his 18 points in the second half. Jamarius Burton contributed 14 points and seven rebounds, while Nelly Cummings scored 11 points.

Both teams were without their best players. VCU point guard Ace Baldwin watched from the bench, nursing his broken wrist. Pitt’s John Hugley IV was out with a sore knee, an injury that he re-aggravated in the Panthers loss to Michigan in the opening round.

VCU took its biggest lead, 32-24 early in the second half on a layup by Johns. But Pitt answered with a 14-0 run to take the lead.

Hinson triggered the surge with a layup and a 3-pointer. Then the Panthers turned up the defensive pressure, forcing turnovers that produced fastbreak baskets.

Guillermo Diaz-Graham made a steal which led to a breakaway slam dunk and Cummings added two baskets as the Panthers assumed a 38-32 lead.

But VCU answered right back with a run of its own triggered by a 3-pointer by David Shriver, setting the scene for a see-saw second half.

In an ugly first half, Pitt opened by taking a 5-0 lead but Virginia Commonwealth controlled the flow the rest of the way with its aggressive defense.

The Rams pushed their lead to six points on four occasions but couldn’t expand it as they shot just 33.3% in the period.