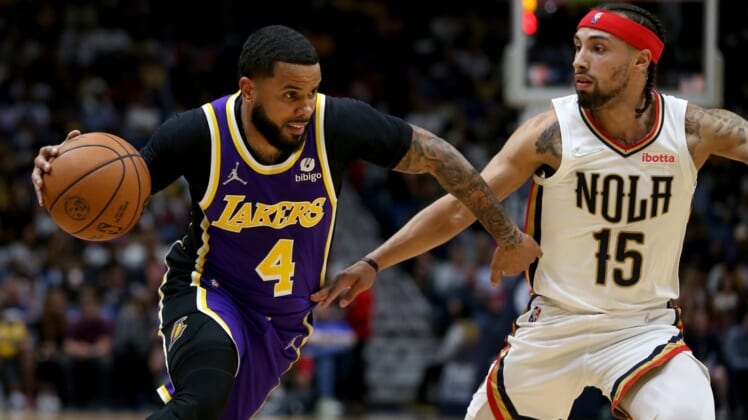 Brandon Ingram returned from a 10-game absence to score 26 points and the host New Orleans Pelicans overcame a 23-point deficit to beat the Los Angeles Lakers 116-108 on Sunday night.

The Lakers (31-43) led by 23 in the second quarter and by 20 at halftime, but rookie Trey Murphy III, who finished with 21 points, led a third-quarter comeback before Ingram, who had been sidelined by a hamstring strain, took over in the fourth.

Jonas Valanciunas added 19 points and 12 rebounds, CJ McCollum scored 18 and Herbert Jones Jr. had 16 points and a season-high six steals for the Pelicans (32-43), who moved a half-game in front of the Lakers into ninth place in the Western Conference.

The comeback was one-point short of the largest ever for New Orleans, which clinched the season series against the Lakers with one game remaining April 1 in Los Angeles.

LeBron James scored 39 points, Malik Monk added 23 and Russell Westbrook had 18 for the Lakers, who were outscored 67-39 in the second half.

Valanciunas made two free throws to give New Orleans its first lead of the game at 98-96 with just over eight minutes left. Los Angeles briefly regained a one-point lead, but Ingram scored seven points as the Pelicans took a 111-105 lead.

Monk’s 3-pointer cut the lead in half, but Valanciunas made a layup and McCollum added a basket on a goaltend by James. That gave New Orleans a 115-108 lead with 29.5 seconds left.

James made two 3-pointers and two more baskets as the Lakers scored the first 12 points of the game and took a 31-23 lead at the end of the first quarter. They held a 69-49 halftime lead.

Murphy led a third-quarter charge by the Pelicans, who got within two points twice before Westbrook’s layup gave Los Angeles a 94-90 lead at the end of the period. Murphy scored 16, making all three of his 3-point attempts, as the Pelicans outscored the Lakers 41-25 in the period.