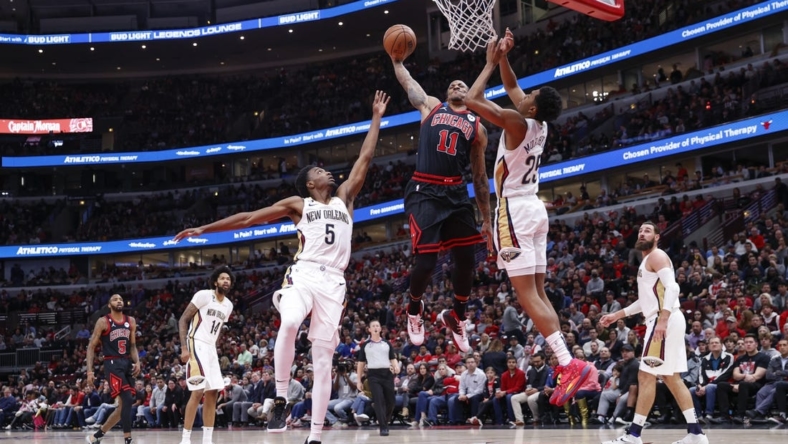 Brandon Ingram scored 16 of his 22 points in the fourth quarter and Jonas Valanciunas recorded a double-double of 21 points and 13 rebounds to lift the visiting New Orleans Pelicans to a 115-111 victory against the Chicago Bulls on Wednesday night.

Zion Williamson chipped in 19 points for the Pelicans, including 15 in the second half, while Herbert Jones scored 17.

DeMar DeRozan scored a game-high 33 points for the Bulls, his fifth game with at least 30 points this season. Zach LaVine (23), Nikola Vucevic (18) and Goran Dragic (14) followed.

New Orleans prevailed despite shooting 3-for-19 from long range.

The Bulls used an 8-0 run midway through the fourth quarter to take a 97-93 lead with 5:23 to play. The Pelicans scored the next seven points, however, continuing a back-and-forth night that saw the teams combine for 19 ties and 14 lead changes.

After trailing by 11 points in the third quarter, the Bulls rallied to take the lead behind a 7-0 run over the final 2:01 of the period. Dragic played an integral role in the surge, converting a three-point play to give Chicago the lead before delivering the assist on an alley-oop dunk to Javonte Green to extend the advantage about a minute later.

Returning to the lineup following a six-game absence with a left shoulder injury, the Bulls’ Andre Drummond had five rebounds, two off Vucevic’s team lead.

Chicago raced to an 11-point lead before halftime but was unable to sustain the momentum. After a Derrick Jones Jr. layup boosted the Bulls’ advantage to 39-28 with 8:06 to play in the second quarter, the Pelicans responded with a 24-11 run to take a two-point lead into halftime.

The Bulls stayed afloat behind their top two scorers, as DeRozan and LaVine combined for 29 points on 12-for-21 shooting. Valanciunas paced the Pelicans with 13 first-half points.

Chicago’s Coby White remained out with a quad contusion.