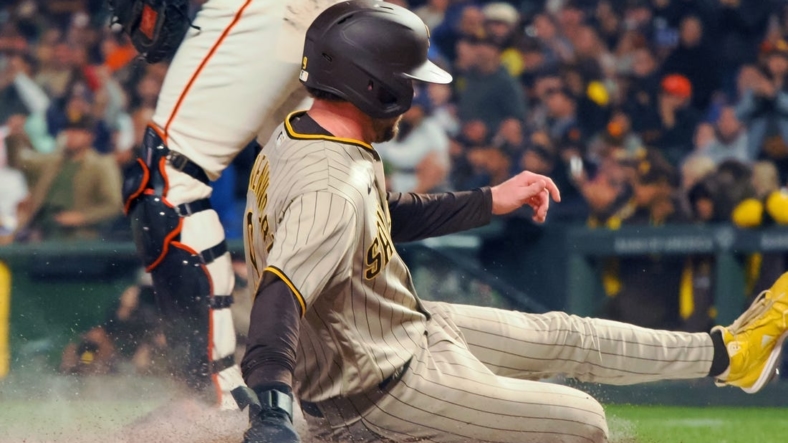 Brandon Drury homered and drove in three runs, right-hander Mike Clevinger threw five effective innings, and the visiting San Diego Padres held on to take the opener of a key three-game series with a 6-5 victory over the San Francisco Giants on Monday night.

Austin Nola chipped in with a two-run single for the Padres, who moved 8 1/2 games ahead of the Giants in the race for the final National League wild-card berth in a game delayed 40 minutes between the second and third innings because of a lights malfunction.

In winning for the third time in four days on a nine-game trip, San Diego jumped on Giants starter Carlos Rodon (12-7) for three runs in the first inning, two coming on Drury’s 24th homer of the season. Josh Bell’s RBI single one batter earlier had opened the scoring.

Nola’s two-run hit made it 5-0 in the fourth after Wil Myers had walked and Jake Cronenworth had doubled.

Rodon, who had been unbeaten in his last five starts, was pulled after four innings, equaling his second-shortest outing of the season. He was charged with five runs on four hits, with four walks and two strikeouts.

Clevinger (5-5) allowed a two-run homer to Joc Pederson, his 19th, in the fourth, but no other runs and only four other hits in his five innings. He walked one and struck out three.

Drury capped his three-RBI night with a run-scoring single that made it 6-2 in the fifth, an insurance run that proved pivotal in the end when the Giants rallied for three runs in the eighth on a two-run single by Austin Slater and an RBI hit by J.D. Davis.

Nick Martinez, who served up the hits to Slater and Davis, rebounded to get Austin Wynns on a pop-up to shortstop to end the inning with two runners aboard.

Martinez stayed to record his fourth multiple-inning save of the season, his seventh overall, with a 1-2-3 ninth.

Bell finished 1-for-1 with three walks, a run and an RBI for the Padres, who moved within 1 1/2 games of the Phillies for the second NL wild-card spot.

LaMonte Wade Jr. collected three hits, while Davis, Brandon Crawford and Thairo Estrada had two apiece for the Giants, who were opening a six-game homestand after losing the final four times on an eight-game trip.