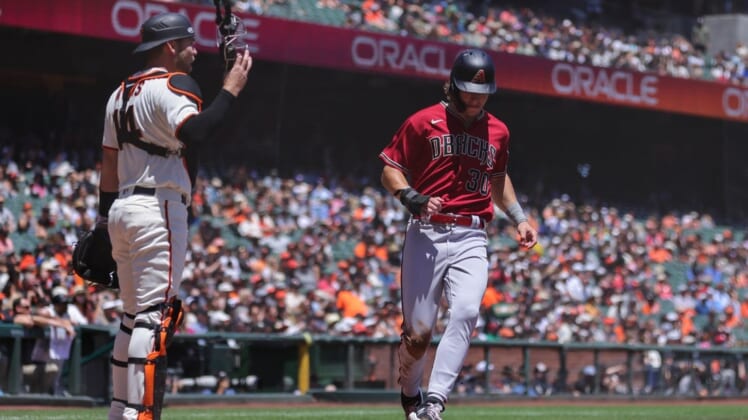 Brandon Crawford lined a bases-loaded single off the glove of right fielder Daulton Varsho to score Brandon Belt with the winning run in the bottom of the ninth inning Wednesday afternoon as the San Francisco Giants rallied for a 4-3, walk-off win over the Arizona Diamondbacks.

Crawford ripped closer Mark Melancon’s first pitch deep enough to right that Belt could have tagged and scored even had Varsho made the catch. The hit was the first of Crawford’s career against Melancon (3-8), a former teammate, after having been 0-for-7.

Crawford faced the same situation Tuesday night in the eighth, and hit into an inning-ending double play with the potential tying run at third base.

Belt, whose home run two innings earlier ignited a rally from a 3-0 deficit, got the winning uprising going with a single. With one out, Mike Yastrzemski doubled to right, sending Belt to third, after which David Villar drew a four-pitch walk to load the bases and bring Crawford to the plate.

Giants closer Camilo Doval (3-4) was credited with the win after stranding Alek Thomas at third base in the top of the ninth to preserve the tie.

Down 3-0 after the Diamondbacks scored two in the second and one in the third, the Giants rallied with two of their own in the seventh and one in the eighth. Wilmer Flores’ pinch-hit home run off Arizona All-Star Joe Mantiply leading off the eighth got the hosts even.

The homer was Flores’ 13th of the season.

Belt launched his seventh, a solo shot, and Villar added a sacrifice fly three batters later to account for the Giants’ first two runs off Arizona starter Zac Gallen, who had taken a one-hit shutout into the seventh.

He left after Villar’s sacrifice fly, charged with two runs on four hits in 6 2/3 innings. He walked two and struck out five.

Arizona’s early runs off Giants reliever Sam Long came via a two-run triple by Varsho in the second and a solo homer by Ketel Marte, his seventh of the season, in the third.

Belt, Yastrzemski and Thairo Estrada had two hits apiece for the Giants, who won the series 2-1 after dropping two of three in Arizona last week. Belt scored two of San Francisco’s four runs.

Marte and Jake McCarthy had two-hit days for the Diamondbacks, who were out-hit 9-8.