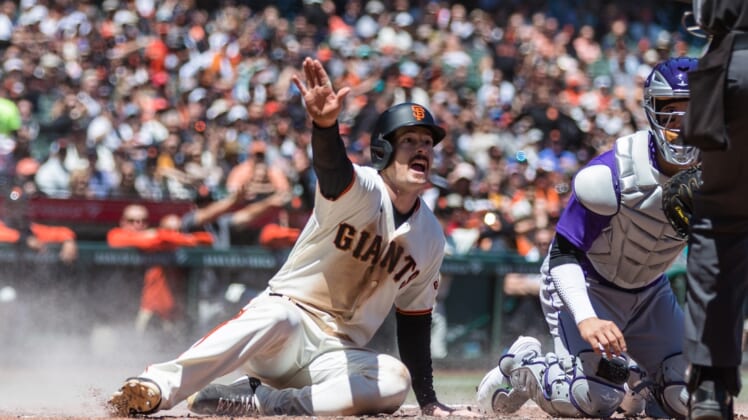 Brandon Crawford drove in three runs, two with a fifth-inning home run, Alex Cobb combined with four relievers on a four-hitter, and the San Francisco Giants completed a three-game home sweep of the Colorado Rockies with a 7-1 victory Wednesday afternoon.

In a duel of teams that were tied in the standings at the beginning of the week, the Giants used 8-5, 9-2 and 7-1 wins to run their winning streak to five games, effectively soothing the sting of a five-game losing streak that immediately preceded the run of success.

For the third straight day, the Giants never trailed, taking the lead for good with a three-run fourth inning off Rockies starter Chad Kuhl (3-1). Crawford had his first RBI in the inning with an infield out, before Joey Bart added an RBI single and Brandon Belt made it 3-0 with a sacrifice fly.

Crawford hit Kuhl’s last pitch for a two-run homer to make it 5-0 in the fifth. His third home run of the season followed a two-out single by Thairo Estrada.

Kuhl was pulled after allowing five runs and seven hits in 4 2/3 innings. He walked three and struck out eight.

Cobb (2-1) went three batters into the sixth, exiting with two on and one out.

He was relieved by Jose Alvarez, who gave up the Rockies’ lone run on Charlie Blackmon’s infield out before escaping further damage with a 5-1 lead.

The Giants completed the game’s scoring in the eighth on an RBI single by LaMonte Wade Jr. and bases-loaded walk drawn on an 11-pitch at-bat by Joc Pederson.

Wade (3-for-4) and Belt (2-for-3) combined for five hits and two RBIs atop the lineup for the Giants, whose only extra-base hit of the game was Crawford’s homer.

The Rockies’ hits — all singles — came in the first, fifth, sixth and seventh innings as they completed a 1-5 trip that began with two losses in three games at Arizona.