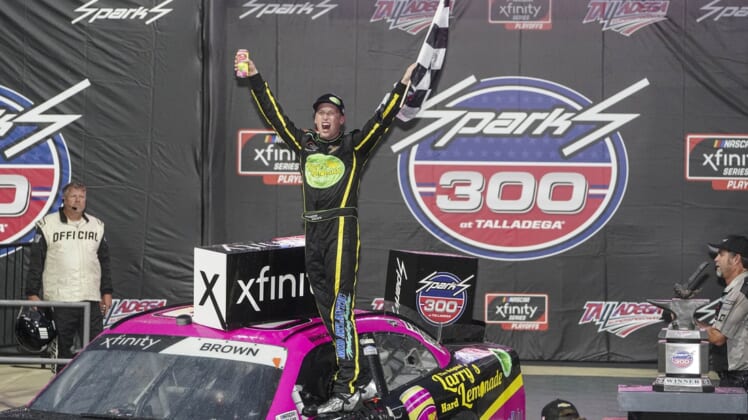 TALLADEGA, Ala. — As he crossed the finish line under caution on a dark race track, Brandon Brown surrendered to the emotion of his first victory in the NASCAR Xfinity Series.

On a day of unexpected victories at Talladega Superspeedway — a track where the unexpected sometimes seems commonplace — Brown had a narrow lead three-wide with Justin Allgaier and Brandon Jones at the previous scoring loop when NASCAR called the fifth caution of the race on Lap 102 for a multicar wreck in Turn 4.

With darkness preventing the resumption of the race, NASCAR showed the checkered flag to Brown under yellow on Lap 107 of a scheduled 113, with Jones credited with second and Allgaier third.

Brown’s excitement hadn’t abated one iota by the time he got to Victory Lane.

“You can ask my neighbors at Coastal Carolina, I did plenty of burnouts to practice for this moment,” said Brown, who drives for his family-owned team, Brandonbilt Motorsports. “Oh, my god. It’s a dream come true. A Talladega winner. Oh my god, Dad, we did it!

“This is everything we hoped and dreamed for. Everything I’ve ever wanted to do is take the trophy home to Mom and Dad. Oh, my god. Thank you so much Larry’s Lemonaid… all of our partners. It’s unbelievable.”

Brown was a keen student of the action during the first two stages of the race, won by John Hunter Nemechek and Blaine Perkins. He noticed major changes in momentum between the top and bottom lanes at the 2.66-mile track.

“Everything shifted top to bottom so much, it was like, ‘OK, let’s just stay patient where we’re at and hope for the best,” Brown said. “We saw our moment and we seized it. God, I’m just so proud of Brandonbilt Motorsports and so proud of our team, here and at home and everyone that worked on our team since the beginning.

Brown, Jones and Allgaier were trading the lead three-wide when the No. 20 Toyota of Harrison Burton broke loose in Turn 4 and ignited an eight-car crash that slowed the race for the final time.

Daniel Hemric finished fourth, followed by Jordan Anderson, Justin Haley, Jeb Burton and defending series champion Austin Cindric, who clinched a spot in the Round of 8 in the Xfinity Playoff with an insurmountable points edge over ninth-place Jeb Burton.

On the final lap of the first stage, the cars of Sam Mayer and regular-season champion AJ Allmendinger collided in Turn 3, demolishing both vehicles. The No. 8 JR Motorsports Chevrolet of Mayer slammed the outside wall so heavily that NASCAR had to red-flag the race for repairs to the SAFER barrier.

Allmendinger took a heavy hit in the points, but he’s still 33 above the cut line heading to next Saturday’s Round of 12 elimination race at the Charlotte Roval, a track where he is expected to excel.

“That’s why you work so hard during the regular season to build up bonus points,” Allmendinger said after a trip to the infield care center. “We’ll see where it puts us going into the Roval … It’s a minor setback in a great year.”

If Allmendinger’s setback was minor, the hit Noah Gragson suffered in a Lap 88 wreck was a major one. Gragson was running at the front of the field in the inside lane when slight contact from Jeb Burton’s Chevrolet to the left rear of Brett Moffitt’s Camaro — after Moffitt’s car had gotten loose-triggered the first major wreck of the event.

Moffitt’s Chevy slid down the track into Gragson’s No. 9 Camaro, which rocketed nose-first into the outside wall. As Gragson slipped back down the track, Myatt Snider — with nowhere to go — plowed into the rear of Gragson’s car.

Like Allmendinger, Gragson suffered a significant blow in the standings but remained 18 points above the current cut line for the Round of 8.