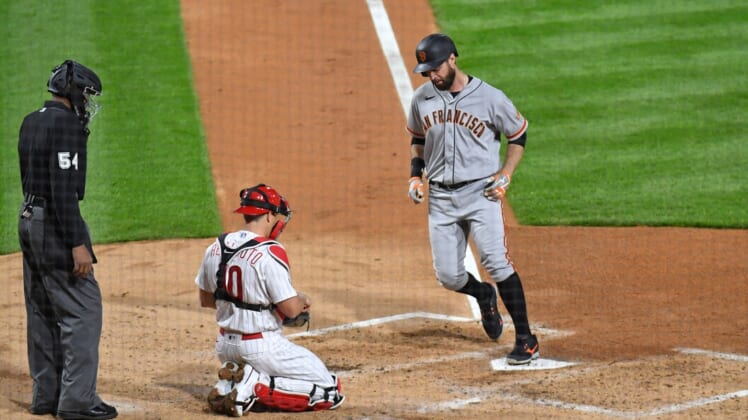 Brandon Belt homered and drove in two runs to lift the San Francisco Giants past the host Philadelphia Phillies 2-0 on Monday.

Wandy Peralta earned his second save in three opportunities with a scoreless ninth.

It was Giants manager Gabe Kapler’s first visit to Philadelphia since being fired from the Phillies after the 2019 season and replaced with Joe Girardi.

Jean Segura added a double — the 200th of his career — and extended his hitting streak to 10 in a row.

The Phillies left 11 runners on base.

Phillies starter Chase Anderson (0-2) lasted only four innings and allowed five hits and two runs while striking out five and walking none.

The Giants jumped out to a 2-0 lead in the third inning when Belt blasted a two-run home run to right field.

In the third, Rhys Hoskins and Harper each singled to place runners at first and third with two outs. After Harper stole second, J.T. Realmuto struck out looking to end the threat.

Gausman also worked out of a jam in the fourth as he stranded runners on second and third by inducing a soft groundout to Brad Miller to end the fourth.

Brandon Kintzler retired the Giants in order in the eighth.

In the bottom of the eighth, Alec Bohm opened with a single against Camilo Doval. Segura grounded into a fielder’s choice and Mickey Moniak flied out to center. Nick Maton, who had his first career hit in the sixth, lined out to end the inning.

Curt Casali snapped an 0-for-19 skid with a two-out double in the ninth, but Donovan Solano flied out to deep center.

Pinch hitter Andrew Knapp struck out to begin the ninth, Andrew McCutchen grounded out and Hoskins grounded out to third to end the game.