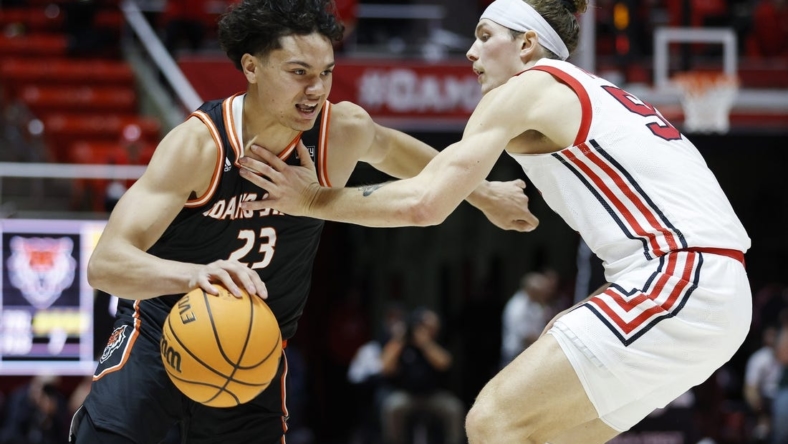 Carlson also blocked four shots for Utah (3-0), which finished with a 44-29 advantage on rebounds and outscored the Bengals 38-28 on points in the paint.

Kolby Lee scored 15 points, Brock Mackenzie chipped in 13 and Miguel Tomley added 11 to lead the Bengals. Idaho State (1-2) trailed wire to wire but gave the Utes plenty of trouble over 40 minutes, becoming the first team to score at least 50 points on Utah this season.

The Bengals struggled to keep pace with Utah as the first half progressed. Idaho State endured a long shooting drought after Lee made a layup with 12:04 left before halftime to bring the Bengals within 19-17. The visitors then went nearly four minutes without making a basket.

Idaho State rallied in the second half behind a 10-1 run and pulled within a point when Austin Smellie buried a corner 3-pointer to cut Utah’s lead to 53-52 with 9:39 to go. The Utes went nearly seven minutes without making a basket, opening the door for a rally.

The Bengals were unable to overtake Utah in that stretch. Carlson kept the Utes a step ahead by making four free throws and throwing down a dunk to stop the run and extend the lead to 59-52 with 5:57 left.

Utah slammed the door on another rally by holding Idaho State to a single basket over the final five minutes — and that was a Lee layup in the last minute with the outcome determined. The Bengals committed four turnovers during that pivotal stretch and missed 15 of their final 18 shots.