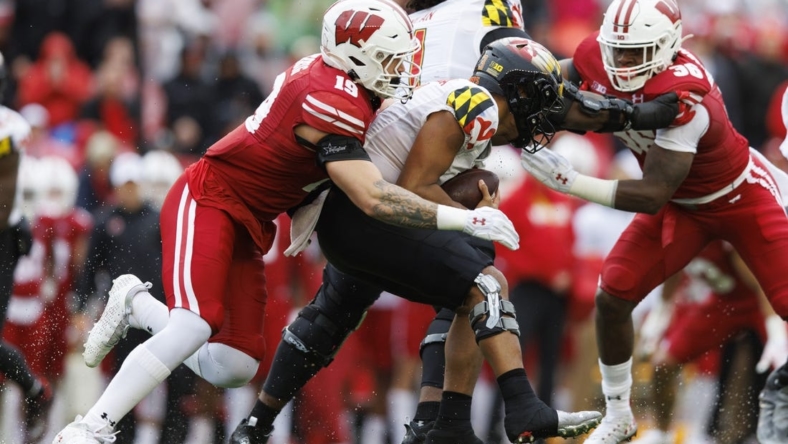 Braelon Allen and Isaac Guerendo each rushed for a touchdown and host Wisconsin posted a 23-10 win over Maryland on Saturday in a rainy Big Ten matchup in Madison, Wis.

Taulia Tagovailoa, who entered Saturday’s play fourth in the nation with a 72.5 completion percentage, completed 10 of 23 passes for 77 yards with one touchdown and one interception. The Terrapins managed just 189 yards total offense – 73 of which came on their only touchdown drive in the closing minutes of the fourth quarter.

Guerendo finished with 114 yards on 12 carries, including a career-long 89-yard run that put the Badgers up 14-0 in the second quarter. Allen had 119 yards on 23 carries as the Badgers piled up 278 yards on the ground.

Wisconsin quarterback Graham Mertz completed 5 of 18 passes for 77 yards in the sloppy conditions.

Wisconsin limited the Terrapins to 56 yards and two first downs en route to a 17-0 halftime lead.

The Badgers went in front 7-0 late in the first quarter with a 12-play, 77-yard scoring drive. Skyler Bell picked up 36 yards on a jet sweep to the Maryland 28. After an incomplete pass, Allen carried five straight times, culminating in a 9-yard touchdown run off the left side with 1:21 left in the quarter.

Guerendo extended the lead to 14-0 with 10:16 left in the half, going off right tackle then tight-roping the right sideline for an 89-yard touchdown run. He received a key block from wide receiver Chimere Dike.

After forcing Maryland’s sixth punt of the half, the Badgers moved 48 yards in 10 plays to set up Nate Van Zelst’s 38-yard field goal with nine seconds remaining.

Maryland, which went 1-for-8 on third downs in the first half, converted two to set up Chad Ryland’s 39-yard field goal with 7:29 left in the third quarter to make it 17-3.

Wisconsin answered with a 35-yard field goal by Van Zelst for a 20-3 lead entering the fourth quarter.

Van Zelst, who missed a 33-yard attempt early in the fourth quarter, connected from 28 yards out to put Wisconsin up 23-3 with 6:33 left.