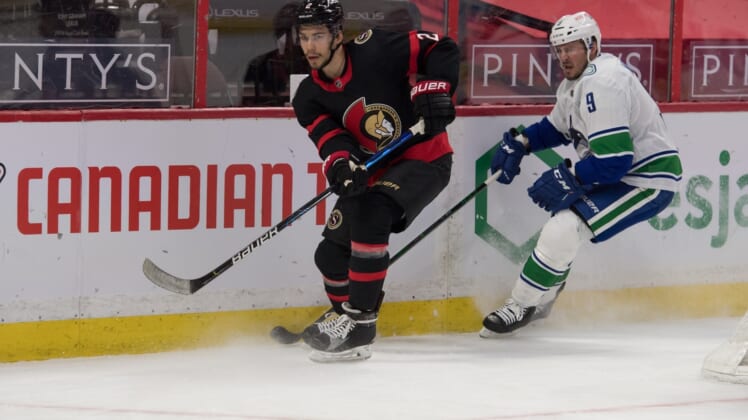 Brady Tkachuk had a “Gordie Howe hat trick” with a goal, assist and a fight as the Ottawa Senators defeated the visiting Vancouver Canucks 6-3 on Wednesday.

Thomas Chabot added a goal and an assist for the Senators (19-27-4, 42 points), who moved out of last place in the all-Canadian North Division for the first time since the opening week of the season.

Tyler Myers had a goal and an assist, with Jake Virtanen and Brandon Sutter also scoring for the Canucks. Thatcher Demko stopped 27 of 32 shots.

The Canucks dropped to 3-3-0 since an 18-day pause because of a COVID-19 outbreak in which 22 players and four staff members tested positive.

Mete gave the Senators an early lead at 2:04 of the first period, taking a lead pass from Formenton at center ice, splitting two defenders at the blue line and beating Demko with a wrist shot from between the faceoff circles.

It remained 1-0 until the second, when the teams combined for five goals in the opening 7:23 of the period.

Tierney scored 38 seconds into the second after a shot from the blue line went off the shin pads of defenseman Alexander Edler and fell straight to Tierney near the right post.

Norris made it 3-0 just 32 seconds later, tapping the puck into the net from the top of the crease after taking a pass from Tkachuk.

Myers pulled the Canucks within 3-1 with a wrist shot from the top of the right faceoff circle at 5:43.

Tkachuk tallied off a breakaway down the right wing at 16:13 of the second for a 5-2 lead.

White scored an empty-net goal at 14:33 of the third after the Canucks pulled Demko with more than seven minutes remaining.