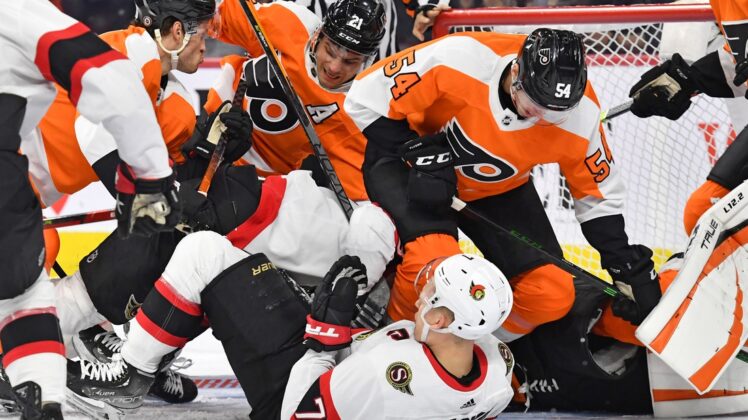 Brady Tkachuk had one goal and one assist, Josh Norris and Travis Hamonic added one goal apiece and the Ottawa Senators defeated the host Philadelphia Flyers 4-2 in the final regular-season game for both teams on Friday.

Tkachuk reached the 30-goal plateau for the first time in his career.

Owen Tippett had one goal and one assist and James van Riemsdyk contributed one goal for the Flyers (25-46-11, 61 points).

Soon after the Senators had several solid scoring chances on the power play, van Riemsdyk connected for the Flyers with the extra skater at 18:31 of the first period. It was van Riemsdyk’s 24th goal of the season, which was a nifty shot between his legs.

Tkachuk was aggressive throughout the opening 20 minutes with three shots on goal.

Tkachuk drew a roughing penalty from Egor Zamula at 7:30 of the second period for the Senators’ third power play. The Flyers killed off the penalty rather easily.

The Senators equalized at 1 when Norris scored at 11:51 of the second.

Tippett skated in and took a backhand shot as he went sprawling into the side of the goalpost at 1:44 of the third. Tippett remained down for a few minutes before skating to the bench.

Just 12 seconds later, the Senators went ahead 2-1 when Hamonic fired a slap shot on the short side of Jones and into the net.

Kevin Hayes ripped a wrist shot on goal at 8:30 and Travis Konecny also had a couple of chances on the rebound but couldn’t convert.

The Flyers held a two-man advantage for 54 seconds at 11:44 and Tippett responded with a power-play goal with a slap shot from the point at 12:33.

Tkachuk responded for the Senators with a power-play goal at 16:38 for a 3-2 lead.