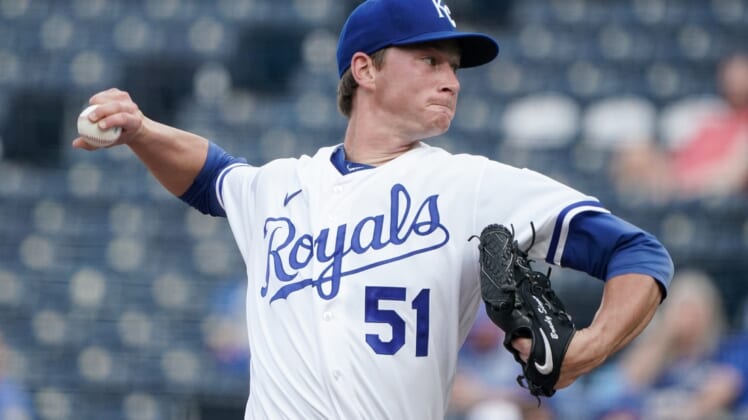 Singer (1-0), recalled from Triple-A Omaha after the day game, made good use of his changeup. He mixed in all three pitches, and he finished with a career-high nine strikeouts while allowing four hits and no walks.

Singer was relegated to the bullpen out of spring training, and made just three appearances, all in relief, before being sent to Omaha in late April to work on his changeup. He had success in Triple-A, going 1-0 with a 3.29 ERA in three starts.

After Royals reliever Collin Snider allowed a run in the eighth inning, Josh Staumont earned his third save with a 1-2-3 ninth.

The Royals, after going 0-for-12 with runners in scoring position in the first game and 0-for-2 in those situations in the first inning of the nightcap, finally capitalized in the second inning.

Emmanuel Rivera led off the inning with a double and went to third on a groundout. Michael A. Taylor then pulled a double into left field to drive in Rivera.

The Royals got another run in the sixth when Melendez launched a 1-2 pitch 425 feet to right-center.

The White Sox got a run in the eighth. AJ Pollock hit a one-out double, went to third on Josh Harrison’s single and scored on Adam Engel’s groundout. Yoan Moncada then singled to left, and Andrew Benintendi threw out Harrison at the plate as he attempted to score the tying run.