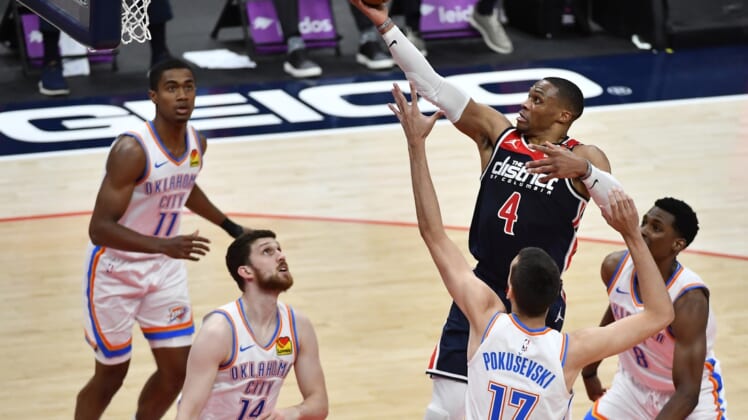 Bradley Beal scored 30 points and Russell Westbrook recorded yet another triple-double to lift the Washington Wizards to a 119-107 home win over the Oklahoma City Thunder on Monday night.

Westbrook had 13 points, 11 rebounds and 17 assists for his 26th triple-double of the season and his eighth in nine games.

The first 138 of those 172 triple-doubles came with Oklahoma City. Monday’s was his second time reaching the mark in seven career games against the Thunder.

The Wizards led by as many as 17 early before the Thunder got back into the game with a 27-11 run to cut Washington’s lead to 59-58 late in the second quarter.

Tony Bradley and Theo Maledon each scored eight during the eight-minute stretch.

But the Wizards scored five quick points before half, including Davis Bertans’ buzzer-beating 3-pointer on a feed from Westbrook.

Washington got to the free-throw line 23 times in the first half but hit just 13 of those.

The Wizards led by 11 early in the fourth, but Oklahoma City kept coming with an 11-2 run to cut the deficit to two with nine minutes remaining.

But two quick hook shots from Robin Lopez helped give the Wizards some breathing room and then Beal and Bertans stretched the lead once again and gave Washington its seventh win in eight games.

Bertans hit six 3-pointers to score 21 points off the bench for the Wizards, while Lopez had 17 as Washington had 55 points from its bench.

Darius Bazley had a career-high 26 points to lead the Thunder. Bazley was just 7 of 19 from the floor and 1 of 6 from behind the arc but was 11 of 13 at the free-throw line. Bradley hit his first seven shots to add 16 points and finish 7 of 9 from the floor.

Washington was just 4 of 6 from the free-throw line in the second half while Oklahoma City was 12 of 15.