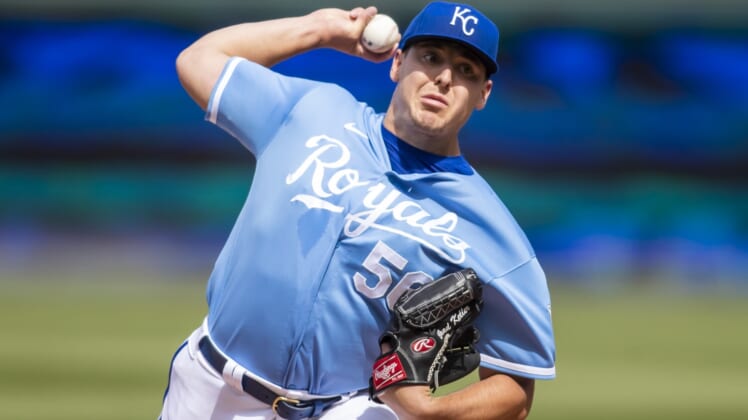 If the Kansas City Royals are going to continue their progress toward contention in 2022, they’ll need several of their young pitchers to advance. Included on the list is Brad Keller, the “veteran ace” before the arrival of Zack Greinke in the offseason.

Keller and the Royals will host the Detroit Tigers on Friday night in the second game of a four-game series. Keller (0-0, 0.00 ERA) will face Tarik Skubal (0-1, 9.00) while looking to snap Kansas City’s four-game losing streak.

The Tigers won the series opener 4-2 Thursday night as Miguel Cabrera collected three hits, giving him 2,994 for his career.

The Tigers jumped to a 2-0 lead in the second when Cabrera scored on a sacrifice fly to short left. The Royals tied it in the fourth, but three straight two-out singles produced two Detroit runs in the seventh for the winning margin.

Keller, a Rule 5 draft selection in December 2017, is coming off a 2021 season in which he had the worst ERA of his career, more than a point higher than in any previous season. He finished 8-12 with a 5.39 ERA, shut down in late August when his ERA was at its lowest point of the year.

There may be plenty of scientific reasons to believe that 2022 will be a turnaround season for Keller, but the biggest reason might be that it’s an even year. In his four-plus-year career, Keller is 14-9 with a combined 2.91 ERA during even-numbered years. In odd-numbered years, he is 15-26 with a combined 4.73 ERA.

Keller isn’t focused on anything but repeating his first start of the season. He pitched six scoreless innings Saturday as the Royals beat the Cleveland Guardians 1-0 in 10 innings. Keller struck out five while walking one and giving up just two hits. Instead of nibbling, he went right after the Guardians’ offense.

“You look around our infield and outfield, we got Gold Gloves all over the place,” the right-hander said. “Got to let them work. They did an unbelievable job all day. It’s really refreshing and something everyone knew they would do.

“For some reason, I didn’t give them a chance to work last year. Trying to keep that mentality going forward.”

Skubal didn’t have the same success as Keller in his first start of the year, taking a loss against the Chicago White Sox on Sunday. He allowed five runs (four earned) on seven hits in four innings. Skubal struck out three and walked one.

After working on his changeup during the offseason, the 25-year-old lefty said the pitch cost him against Chicago, and he wants to depend more on his fastball.

“I just think against a right-handed-dominant lineup, it’s going to play really well, just to let the fastball play up,” Skubal said. “When I did throw it where I wanted to, I got a lot of good results. I just didn’t consistently command it.”

Skubal is 1-4 with a 4.40 ERA in six career appearances (four starts) against the Royals.