Bracing for blizzard, Bills cancel practice due to illness 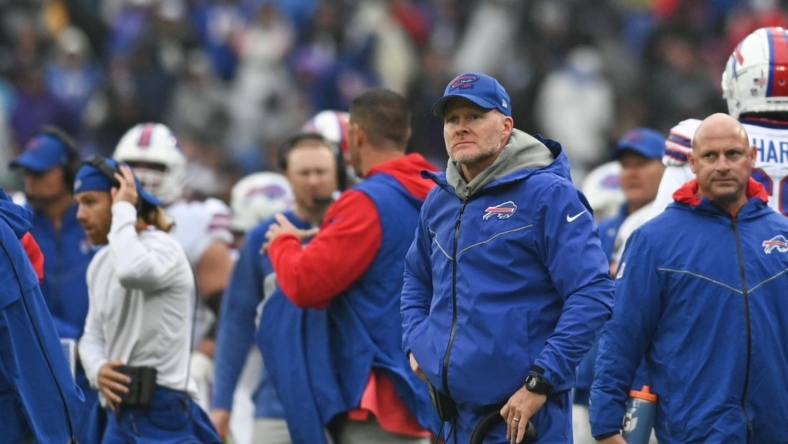 Bracing for a blizzard warning with the potential to bring “historical snowfall” to Western New York in the next four days, the Buffalo Bills canceled practice on Wednesday due to an illness-related player shortage.

Head coach Sean McDermott would not divulge specifics regarding the illness but had to change his practice plan due to limited player availability. The Bills went from a full practice and team workout on the field to individual and position work with those available and healthy.

While quarterback Josh Allen (elbow) and safety Jordan Poyer (elbow) were among players who participated, McDermott summarized his team didn’t have enough bodies for a normal practice.

“Sometimes you’re thrown a little bit of a curveball and you make the most of it,” he said. “And that’s what we do. So we’ll get out of it what we can and the players have to be dialed into the walkthrough portion of it and get those mental reps and then we’ll come back (Thursday) and reset and see where we’re at.”

The Bills dropped to 6-3 last week with a home loss in overtime to the Minnesota Vikings. They hope to avoid three defeats in a row on Sunday when the Cleveland Browns are scheduled to play at Buffalo.

Weather Channel’s Jim Cantore said Wednesday he was interested to see how the NFL would handle the forecast for a lake-effect blizzard projected to dump feet of snow — up to 48 inches by Sunday — on the region.

McDermott, who recalled the 2017 snow game as his first experience with the heavy and rapidly accumulating phenomenon, said the NFL and Bills have been in contact about the weather. McDermott said there was no indication the NFL would move the game or change the game date.

During that December ’17 game, McDermott said he left the field after warmups for the locker room and came back not long after to see a much different scene at the field level.

“I saw the amount of snow already just in that amount of time that had lapsed between going in and coming back out and I turned to him and I said, ‘Is this normal?’ Because you hear stories when you move here,” McDermott said. “And we’re walking down, I’m getting ready for the game and he goes, ‘No.'”

The Bills are moving to put plans in place for players and staff impacted as snow piles up this week.

“We’ve got a lot of guys from Florida, a lot of guys from down south, out west even, that have never seen snow before,” McDermott said, pointing to the development team filling a bigger role this week. “They equip them with scrapers and de-icing mechanisms. We’ve already started to put a plan in place behind the scenes of what happens if we can’t get in Friday, what happens if we can’t get in Saturday, or to the hotel Saturday evening (where the team stays the night before games) with that being downtown.”