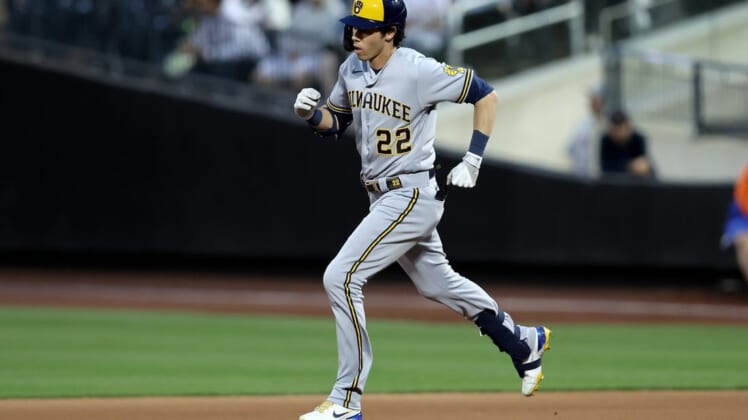 Nick Plummer recorded the tie-breaking RBI in the eighth inning Thursday night for the host New York Mets, who overcame a three-run deficit to edge the Milwaukee Brewers 5-4 in the rubber game of a three-game series.

The Mets, who have alternated wins with losses in their last six games, extended their lead in the National League East to 4 1/2 games over the idle Atlanta Braves, who have won 14 straight.

The Brewers fell to 3-11 this month and dropped two games behind the idle first-place St. Louis Cardinals in the NL Central.

Both starting pitchers — Tylor Megill for the Mets and Aaron Ashby for the Brewers — left with injuries. Megill walked off with one out in the fourth due to right shoulder soreness and was scheduled to undergo testing Friday. Ashby departed with one out in the fifth with left forearm tightness. Milwaukee called his exit precautionary.

Mark Canha hit a two-run homer in the fifth off Ashby to begin the comeback for the Mets. In the ninth, J.D. Davis delivered a leadoff single against Brent Suter (1-1) and went to third when first baseman Rowdy Tellez threw the ball away while trying to force Davis on Luis Guillorme’s grounder.

One out later, Plummer hit a grounder to first. Tellez threw to second to force Guillorme, but there was no relay to first as pinch-runner Starling Marte scored.

Edwin Diaz earned his 13th save with an eventful ninth. Hunter Renfroe led off with a single and was waved around third on a one-out double by pinch-hitter Tyrone Taylor. But the relay from Plummer to Pete Alonso to Tomas Nido cut down Renfroe. Diaz then struck out Christian Yelich.

Jeff McNeil had an RBI single in the first for the Mets. The Brewers scored all their runs while sending nine batters to the plate in the fourth. Yelich led off with a homer and Megill allowed one-out singles by Tellez and Luis Urias before Andrew McCutchen worked a walk.

Megill threw one pitch to Narvaez before motioning for a trainer. Narvaez then laced a two-run single off Chasen Shreve before Renfroe hit into a forceout as McCutchen scored.