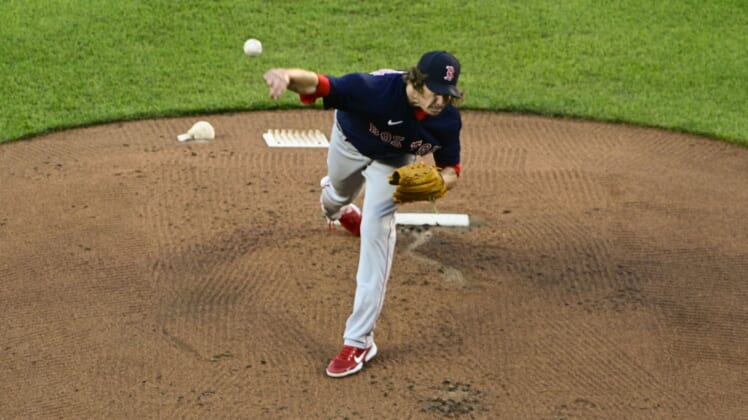 Michael Chavis punctuated his return to the majors with a two-run homer to cap a four-run Boston second inning, sending the visiting Red Sox off to the races in an 11-6 rout of the Baltimore Orioles on Saturday night.

Chavis was recalled from Triple-A Worcester before Friday’s series opener, but did not appear in the Red Sox’s 6-2 victory. He went hitless with a run scored in his only other game with Boston this season April 10 in Baltimore.

Xander Bogaerts (3-for-4) added a two-run homer, Christian Vazquez (2-for-4) and Bobby Dalbec (1-for-5) each drove in a pair and Alex Verdugo had a three-hit day for Boston.

Red Sox right-hander Garrett Richards (2-2) earned the win after giving up four runs on eight hits with a walk and five strikeouts over seven innings.

Boston won its major league-leading 21st game and moved eight games above .500 after its third straight win and eighth in its last 12 games.

Baltimore lost for the fourth time in six games.

Stewart’s two-out RBI single gave Baltimore a 1-0 lead in the first, but it was nearly all Boston after that. Marwin Gonzalez hit a tying RBI double, and Hunter Renfroe added an RBI single to put the Red Sox up for good before Chavis’ first homer of the season made it 4-1.

Galvis’ fourth homer of the year made it a two-run game in the second, but Boston tacked on three more in the third. Vazquez hit an RBI single and Dalbec an RBI double to break the game open at 7-2.

Rafael Devers’ groundout drove in a run, and Vazquez singled in another in the fourth before Bogaerts added his seventh homer of 2021 an inning later.

Mancini broke up a string of seven unanswered Red Sox runs with an RBI double and Ramon Urias tacked on an RBI single in the sixth.

Orioles second baseman Pat Valaika made his debut on the mound in the top of the ninth and tossed a scoreless frame. Hays plated the game’s final two runs with a two-out, bases-loaded single in the ninth.