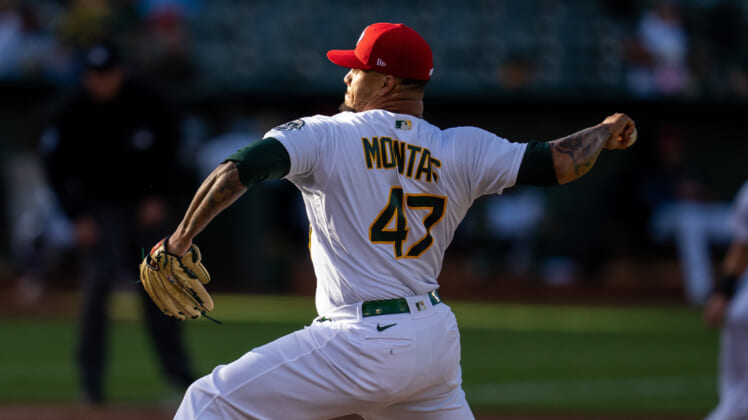 The Boston Red Sox schedule is closing in with Opening Day serving as the beginning for an exciting 2022 MLB season. If Boston wants to compete with the best teams in MLB this year, it needs to make another big move.

Signing Trevor Story significantly improved the team’s outlook in our MLB predictions with the Red Sox fielding one of the top lineups in baseball. However, pitching is still an area of concern.

Even before Chris Sale announced he’d star the season on the injured list, many wondered how this starting rotation would fare in a competitive American League.

As of now, the Red Sox finish well outside our MLB rotation rankings. Thanks to concerns about durability (Sale, Hill, Paxton) and issues with the front-line starters, it’s the biggest thing holding Boston back.

With that in mind, let’s examine three Boston Red Sox trade targets that could improve the rotation.

Frankie Montas always flashed the stuff to be a front-line starter in a great rotation. He started his baseball career with the Boston Red Sox, receiving a $75,000 signing bonus in 2009. After bouncing around in the minors with the Chicago White Sox and Los Angeles Dodgers, it slowly came together for the righty in Oakland.

Unfortunately, he received an 80-game suspension for performance-enhancing drugs in June 2019, a mistake that might have also cost him valuable time and served as a wake-up call. He returned in 2020, battling inconsistency to finish with a 5.60 ERA and a 15.6% K-BB rate.

We saw the best version of Montas in his final 17 starts. He recorded a 2.24 ERA, 2.92 FIP and posted a stellar 28.9% strikeout rate. On top of that, Montas posted the third-highest Swinging Strike rate (15.4%) among all starters after the All-Star Break.

The stuff is real, he’s proven that since the 2018 season. With the Athletics willing to entertain offers, Boston would be smart to make a strong push for this No. 2 starter.

The Boston Red Sox and Tampa Bay Rays aren’t afraid of trading with a divisional foe. It helps that executive Chaim Bloom came directly from the Rays’ organization. Thanks to that level of insight, spending more than a decade (2005-2019) in Tampa Bay, he’ll have plenty of first-hand knowledge on Ryan Yarbrough.

Owed $3.85 million this season and arbitration-eligible through 2024, Yarbrough might not seem like a prime trade candidate. However, the Rays have a ton of pitching depth and that could make Yarbrough more expendable facing the scenario of him becoming more expensive each year.

He’s very different from Montas. Yarbrough finished in the 15th percentile for whiff rate and 14th percentile for strikeout rate in 2021, per Baseball Savant. However, he complied a 1.05 WHIP and 3.97 ERA across 197.1 innings from 2019-’20 with a stellar 5.03 K/BB rate. With his velocity increasing, the Red Sox should at least check on his availability.

The Baltimore Orioles seem intent right now on keeping John Means. However, Buster Olney reported in November 2021 that the club dangled him around to teams at the start of the 2021-’22 offseason. It makes sense, given the southpaw will be near the end of his arbitration window by the time Baltimore is a contender.

He’s exactly the kind of target the Boston Red Sox should dream about. Despite not having great coaching in Baltimore, Means posted a 3.62 ERA in one of the most hitter-friendly stadiums. He displays great command (4.4% walk rate) and held opponents to a .223 batting average this past season.

There is more to work with here, raising the possibility that Means would be even better in Boston. Means started using his fastball less and his changeup more in 2021 and his numbers improved. While he wouldn’t generate a ton of strikeouts, Means could be a dependable No. 2 starter for three seasons in Boston.