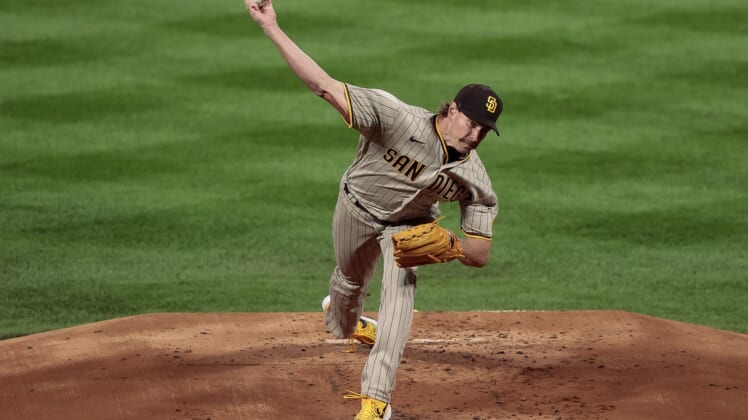 Garrett Richards will reportedly join the Boston Red Sox for the 2021 MLB season, signing a one-year contract to join their rotation as both sides seek to rebound in a new year.

Richards, a 32-year-old righty, had to wait late into January before signing as many teams have been tight with spending this offseason. Fortunately, after a lengthy delay, the veteran hurler seems poised to move to Boston in a move that could make things interesting in the AL East next season.

Entering the offseason, starting pitching was one of Boston’s biggest needs. Nathan Eovaldi, projected to be one of the team’s front-line starters, has struggled with durability during his MLB career. Meanwhile, Eduardo Rodriguez is returning after missing the entire 2020 season due to heart complications caused by COVID-19.

This past week, the Red Sox re-signed southpaw Martin Perez to a one-year deal worth $4.5 million. With a back-end starter secured, the organization knew it still needed another arm capable of sliding into the No. 3 spot of the rotation.

According to ESPN’s Jeff Passan, Garrett Richards has agreed to a one-year contract that will pay him $10 million for the upcoming season. With MLB anticipating a normal 162-game schedule, a year after playing in just 60 games, Richards will likely see the full payout from the deal.

Unfortunately, he underwent Tommy John surgery in July 2018. It was the end result of trying to pitch through issues in his pitching arm for multiple years with the Angels. Just months into his recovery, he signed a two-year contract with the San Diego Padres to continue his rehabilitation.

Richards will likely be locked into a rotation spot with the Red Sox for the upcoming season. His addition should help the team lighten the workload on Chris Sale, who is recovering from TJS.