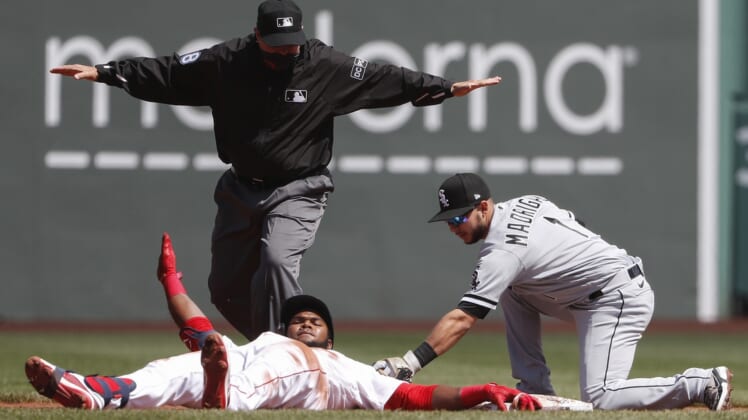 The Boston Red Sox jumped on Chicago White Sox ace Lucas Giolito for eight runs in the first two innings and cruised to an 11-4 victory on Monday in a Patriots’ Day matinee at Fenway Park.

Kike Hernandez, Alex Verdugo, J.D. Martinez each homered for the Red Sox, who earned a split of the four-game set after dropping both ends of a doubleheader on Sunday.

Luis Robert doubled in a run in the first inning to give Chicago a brief lead before Hernandez greeted Giolito (1-1) with a leadoff homer in the bottom half. Verdugo and Martinez followed with back-to-back singles before Rafael Devers singled in a run.

Giolito labored through a 45-pitch first inning, allowing the first six batters to reach base and falling behind 6-1 when Franchy Cordero’s one-out single led to two runs scoring on a pair of errors.

The damage continued in the second as Martinez blasted a leadoff homer and Devers walked before Giolito was replaced by Zack Burdi, who allowed Devers to score on Hunter Renfroe’s sacrifice fly.

Giolito’s ERA ballooned to 5.79 after being charged with eight runs (seven earned) on eight hits.

Verdugo and Martinez had three hits apiece while Christian Vazquez went 3-for-5 with two runs scored. Hernandez, Devers and Cordero each added two hits for the Red Sox, who won for the 11th time in their last 14 games.

Boston right-hander Nathan Eovaldi (3-1) allowed four runs and tied his career high with 10 strikeouts over 6 1/3 innings and improved to 6-1 over his last eight starts.

Adam Eaton had two doubles and drove in three runs for the White Sox, who were looking to move above .500 for the first time this season. Tim Anderson added three hits, two runs scored and two stolen bases.

The Red Sox recorded 17 hits after being held to a total of three runs in the doubleheader sweep on Sunday and improved to 11-0 this season when holding a lead at any point in the game.