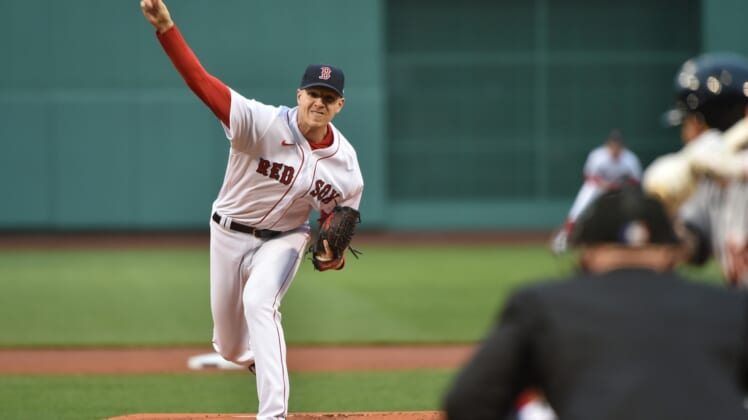 Hunter Renfroe homered among his three hits, Matt Barnes pitched out of an eighth-inning jam and the Boston Red Sox held off the visiting Detroit Tigers 11-7 in the opener of a three-game series Tuesday night.

Alex Verdugo, Xander Bogaerts and Enrique Hernandez also went deep as the Red Sox produced a 14-hit attack to snap a two-game skid. Renfroe’s home run was the 100th of his career.

JaCoby Jones hit a three-run homer and Robbie Grossman had three hits and three RBIs for the Tigers, who have lost six straight and 11 of their past 12.

Detroit was down 9-3 before Jones’ blast in the sixth cut the deficit in half. A Grossman RBI single later in the frame got the Tigers within 9-7, but Jeimer Candelario and Miguel Cabrera each struck out to end the rally.

Christian Vazquez (three hits) doubled home a run in the bottom of the sixth to restore Boston’s lead to three.

The Tigers loaded the bases with one out in the eighth, but Barnes came on and got Cabrera to ground into an inning-ending double play. Hernandez went deep in the bottom of the inning, and Barnes pitched a 1-2-3 ninth to finish his seventh save.

Cabrera also grounded into a momentum-killing double play with two on and no outs down five in the fifth inning. He finished 0-for-5 with two strikeouts. The two-time MVP is hitless in his past 23 at-bats, punching out 13 times.

Detroit scored twice in the second, but blasts by Verdugo and Bogaerts over the Green Monster in left field helped Boston to a 7-2 advantage in the bottom of the frame.

The Red Sox’s eighth run came home on a wild pitch in the third, and Renfroe crushed his milestone homer in the fifth.