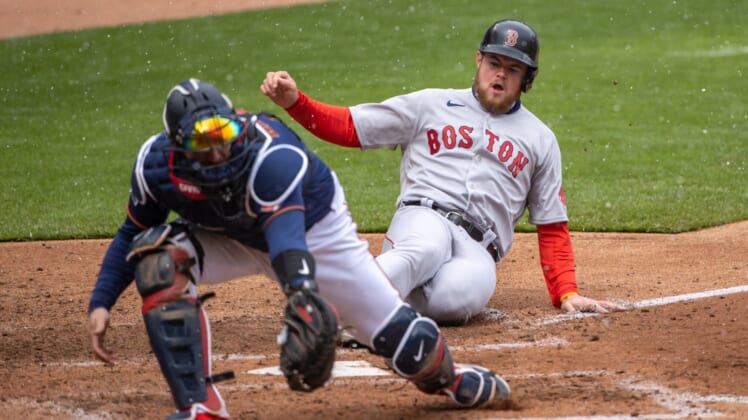 Rafael Devers and Hunter Renfroe each homered and Bobby Dalbec had a pair of RBI doubles as the American League East-leading Boston Red Sox extended their win streak to seven games with a 4-2 victory over the Minnesota Twins on Tuesday afternoon in Minneapolis.

Christian Arroyo also had two hits and scored two runs for the Red Sox, who bounced back from an early 2-0 deficit. Adam Ottavino (1-0) picked up the win in relief while Matt Barnes pitched a 1-2-3 ninth to pick up his first save.

Byron Buxton went 2-for-5 with a double and a run scored for Minnesota, which finished with just five hits while suffering its third straight loss. Randy Dobnak (0-2) picked up the loss, allowing one run on two hits over three innings of relief.

The contest served as the opener of a scheduled four-game set. Monday’s game was postponed after the shooting death of Daunte Wright, a 20-year-old Black man, by a police officer during a traffic stop in suburban Brooklyn Center.

Minnesota took a 2-0 lead in the first off Red Sox starter Martin Perez, parlaying a double, two walks, a hit batter and sacrifice fly into a pair of runs. Buxton led off with a double, Kyle Garlick was hit by a pitch and Mitch Garver followed with a walk to load the bases. Jorge Polanco drove in Buxton with a sacrifice fly, and after Miguel Sano walked to load the bases again, Luis Arraez hit into a fielder’s choice to drive in Garlick.

Boston tied it the fifth off Twins starter J.A. Happ with three consecutive two-out hits. Renfroe made it 2-1 with his first home run of the season, a 416-foot drive to dead center just over Buxton’s glove. Arroyo followed with a single and then scored on Dalbec’s line double into the right-field corner.

The Red Sox took a 3-2 lead in the eighth when Arroyo led off with a double and scored on Dalbec’s double into the right-field corner.

Devers made it 4-2 in the ninth with his fifth home run of the season off reliever Jorge Alcala, a 404-foot drive into the plaza behind the right-field wall. It marked the fourth straight game that Devers has homered.

Twins designated hitter Nelson Cruz was scratched from the lineup about 30 minutes before game time with what the team called a non-COVID illness. The temperature was 33 degrees for the first pitch and the game featured snow flurries during the first five innings.