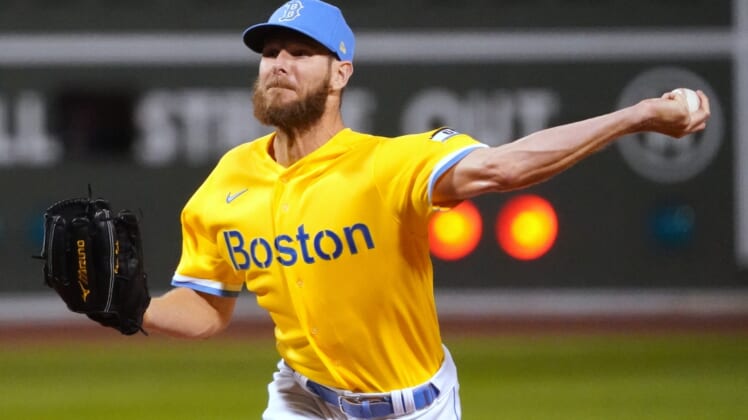 The last time Chris Sale threw a postseason pitch, he struck out Manny Machado at Dodger Stadium to secure the 2018 World Series championship for the Boston Red Sox.

This time, Sale will be pitching in an attempt to keep the Red Sox from falling behind two games to none against the Tampa Bay Rays in the American League Division Series on Friday night in St. Petersburg, Fla.

The Red Sox dropped a 5-0 decision in the series opener Thursday when starter Eduardo Rodriguez lasted only 1 2/3 innings. They are again 1.5-run underdogs in Game 2, with 87 percent of the money and 62 percent of the run-line bets at DraftKings backing the Rays.

Sale, who missed the 2020 season after undergoing Tommy John surgery, returned to finish 5-1 with 3.16 ERA in nine starts this year. He will be making his fifth career postseason start and eighth postseason appearance.

Sale last pitched Sunday in Washington, when he allowed two runs and four hits in 2 1/3 innings before the Red Sox came back to beat the Nationals and secure home-field advantage for the Tuesday wild-card game.

The left-hander made a pair of starts this year against Tampa Bay, going 0-0 with a 2.79 ERA and nine strikeouts in 9 2/3 innings.

“It’s been two years trying to get to this point, you know, all the hard work, all the tears and sweat, you know, throughout the process. So, we have to take care of him. But it was his turn, and we feel comfortable with him.”

The Red Sox managed nine hits Thursday but went 1-for-7 with runners in scoring position. Boston had the bases loaded with one out in the eighth before Rafael Devers struck out and Hunter Renfroe fouled out to end the inning.

“We’re good,” Cora said. “I loved the at-bats today. We put some pressure on them, they made some plays, we hit some balls hard. But we have Chris, and he’s ready to go. The bullpen’s rested, so we should be OK.”

Tampa Bay opened the series by scoring twice in the first inning before Randy Arozarena homered in the third inning and stole home in the seventh. Nelson Cruz also homered and rookie Wander Franco drove in Arozarena with one of his two doubles.

“I just focus a little bit more,” Arozarena said through an interpreter in his postgame interview with FS1. “I’m always ready, regardless, if I’m starting the game or if I’m not. I come out here ready to work and I sacrifice everything to be ready to go. Luckily, it’s happening in October when it means it’s closer to the World Series.”

After getting five solid innings Thursday from rookie Shane McClanahan, the Rays will start another newcomer, Shane Baz, who is even less experienced.

At 22 years, 113 days, Baz will become the second-youngest Rays postseason starter, only behind Matt Moore.

Baz went 2-0 with a 2.03 ERA in three starts after being promoted from Triple-A Durham on Sept. 20. He was Tampa Bay’s Minor League Pitcher of the Year after going 5-4 with a 2.06 ERA in 17 starts with Double-A Montgomery and Durham.

“He showed us enough in his three outings that we felt good about it,” Tampa Bay manager Kevin Cash said. “The funny thing about Shane is his three outings up here were definitely as good, probably better than anything that he had shown in Durham this year. …

“This year he has just skyrocketed with the strike-throwing and the stuff. Very confident that he is fully equipped to go out there and pitch well against a very good Red Sox lineup.”