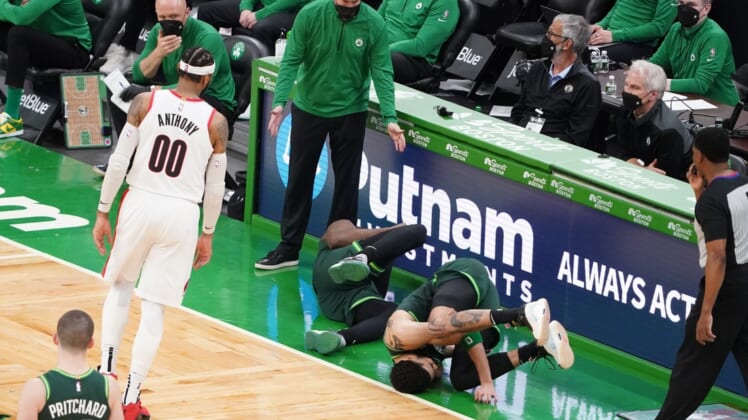 Boston Celtics stars Jayson Tatum and Jaylen Brown left in the final minute of Sunday’s 129-119 loss to the Portland Trail Blazers after sustaining possible leg injuries during a collision.

The two players bumped into each other while defending a Portland inbounds pass with 40.4 seconds left. Brown immediately yelled out in pain and eventually hopped to the locker room on his left leg.

Tatum walked off gingerly and also headed to the locker room. He said afterward that his injury isn’t serious.

“We just collided and he stepped on my foot and fell on my leg,” Tatum said. “It should be all right. We’ll see how I feel tomorrow.”

Boston coach Brad Stevens said during his postgame press conference that both players were being evaluated.

“Jaylen and Jayson, I don’t have any update on them, other than they were both in their rooms being looked at,” Stevens said. “They certainly weren’t swollen yet but that can happen overnight.

“We’ll take tomorrow off and see how that plays out over the next two days, and I will have more information for you on Tuesday.”

Tatum scored 33 points on 11-of-19 shooting against Portland after matching the franchise record of 60 points in Friday’s 143-140 overtime victory over the San Antonio Spurs. Larry Bird also scored 60 during the 1984-85 season.

Brown had 16 points on Sunday but was just 6-of-22 shooting.