The Boston Celtics are overhauling their front office this summer following another disappointing season. With Brad Stevens replacing Danny Ainge and Ime Udoka hired as head coach, the focus now shifts to finding a general manager.

Boston is already moving forward with its early moves to overhaul the roster, with decisions being made by Stevens as president of basketball operations. The Kemba Walker trade was the first domino to fall, but other deals are expected later this summer.

After closing out June by hiring Udoka to take over for Stevens on the bench, Boston could direct its attention toward finding a top executive to work alongside Stevens. While NBA rumors on the process have been quiet, Bleacher Report’s NBA insider Jake Fischer might have provided some insight on who could be hired.

As part of an in-depth piece on the future of the Atlanta Hawks, the Celtics’ general manager vacancy came up. According to Fischer, Hawks’ assistant general manager Landry Fields is Boston’s top choice to join the organization as GM.

But Atlanta would be allowed to block the move. After falling just two wins shy of the NBA Finals, the Hawks may choose to promote Fields to general manager. It would keep him in the building and help assist team president Travis Schlenk. 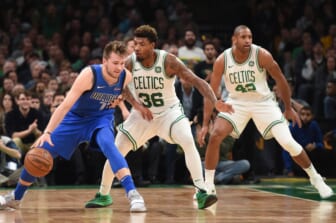 If that happens, the Celtics would look towards their next candidate. Multiple NBA sources indicated to Fischer that Allison Feaster, the Celtics’ vice president of player development, might become the leading candidate to take over as general manager.

Allison Feaster spent a decade in the WNBA, playing for the Los Angeles Sparks, Charlotte Sting and Indiana Fever. She also played overseas, playing across Europe from 1998-2016.

A few years after retiring, she began her post-playing career. She spent 2017 in the NBA’s Basketball Operations Associate Program and later took a job working with the NBA G-League. Before the 2019 season, she was hired by the Boston Celtics.

Feaster has not only been credited by colleagues for being a role model but also for her work with players. The Undefeated’s Marc Spears profiled her ascent and she is a rising name in NBA circles.

It’s already evident she is viewed quite highly by the Celtics. When the organization conducted its final interview with Udoka, per The Boston Globe, Feaster was part of the contingent that only included Stevens and team ownership.

If the Hawks ultimately keep Landry Fields, it wouldn’t be a surprise if the Boston Celtics moved forward by promoting Feaster.