Boston Celtics vs Milwaukee Bucks: 4 winners and losers from Game 1

Fresh off a sweep of the Brooklyn Nets in the first round, the Boston Celtics entered Game 1 of their conference semifinals series against the Milwaukee Bucks riding a ridiculous hot streak.

As for Giannis Antetokounmpo and the defending NBA champion Bucks, they disposed of the Chicago Bulls in five games. Said series did not come without a loss. Star wing Khris Middleton suffered a sprained MCL and will be out the entire second round.

Clearly betting favorites heading into this Game 1 outing, the Celtics struggled early and often finding a groove on offense. In the end, Milwaukee came away with a huge Game 1 win by the score of 101-89, taking home-court advantage away from Boston. Below, we look at four winners and losers from the opening matchup of this conference semifinals series.

With Middleton out of the lineup, Wesley Matthews got the start out on the wing. That created a limited bench for head coach Mike Budenholzer. Rather than expanding the bench with players who normally are out of the rotation, Budenholzer’s rotation went a mere eight deep in this one.

The decision proved to be a success with the likes of Jevon Carter, Pat Connaughton and Grayson Allen stepping up big time. The three combined for 26 points on 9-of-18 shooting while adding eight rebounds and five steals. They also shot 6-of-12 from three-point range while finishing a combined plus-42. For his part, Carter was plus-27 in 21 minutes of action. That’s big. 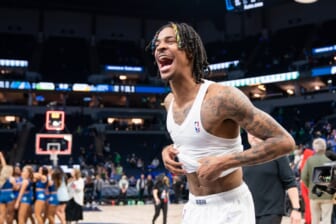 Jayson Tatum entered the conference semifinals as one of the most talked about stars in the game. For good reason. He’s proven to be a No. 1 guy on a championship contending team. In Boston’s first-round sweep of Brooklyn, he averaged 29.5 points and 7.3 assists on 42% shooting from distance. For his part, Jaylen Brown averaged a solid 2.5 points on 49% shooting in the first round.

Neither one stepped up when Boston needed it the most Sunday afternoon. Tatum scored a mere 21 points on 6-of-18 shooting while finishing minus-8 in 40 minutes. Brown was a mere 4-of-13 shooting with seven turnovers in 38 minutes.

It goes without saying that the Bucks are a completely different monster than Brooklyn, especially from a defensive perspective. Even then, these two need to find a way to play through that. If they perform like we saw in Game 1 moving forward in the series, this one won’t necessarily be close. That’s just facts.

It’s pretty darn surprising. With Middleton out of action for Game 1, most figured that the Greek Freak would have to have a huge game in order for the Bucks to come out on top on the road. That didn’t really happen. Antetokounmpo shot a rough 9-of-25 from the field. Sure he put up a triple-double with 13 rebounds and 12 assists. Even then, his scoring output (24 points) was not great.

Enter into the equation an underrated veteran in that of Holiday. Proving that he can be a No. 2 option behind Giannis, Holiday actually led the Milwaukee Bucks in scoring with 25 points while adding 10 rebounds and five assists in a great all-around performance.

Most figured the Celtics would hold a huge advantage when it comes to bench play with Middleton out in this sereis.The team goes nine deep with Grant Williams, Daniel Their, Derrick White and Peyton Pritchard all acting as big time catalysts in the second unit.

Robert Williams got the start for Theis, who played a mere four minutes in Game 1. Meanwhile, Grant Williams, White and Pritchard all struggled making an impact. They shot a combined 6-of-20 from the field while finishing minus-40. That’s obviously not going to cut it.

The performance of White stood out big time. Boston exhausted a first-round pick in the 2022 NBA Draft on the guard. He responded by shooting 2-of-6 from the field while finishing minus-8 in 16 minutes. White needs to step up moving forward. It’s that simple.