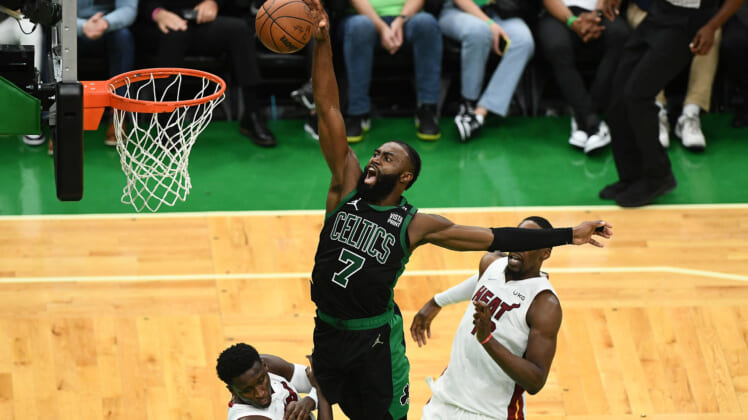 The Boston Celtics opened Game 7 of their Eastern Conference Finals series against the Miami Heat in South Beach on absolute fire.

Miami’s struggles on offense were pretty obvious throughout. Bam Adebayo and Jimmy Butler combined for 12 points. The rest of the Heat roster went 1-of-10 shooting in the first 12 minutes.

As for the Boston Celtics, Jayson Tatum and Jaylen Brown combined for 14 points to nearly match Miami’s scoring output in the first quarter.

The 32-17 lead represented the largest lead for a road team through the first quarter in Game 7 NBA Playoff history.

It’s pretty amazing to think about. Miami went into Boston and saved its season with a Game 6 win Friday evening. It was favored to take out the Celtics and set up an NBA Finals matchup against the Western Conference champion Golden State Warriors.

While there’s still a lot of game remaining, the Boston Celtics look to be in their own league in South Beach. It’s now up to the Miami Heat to pull off what would be an epic comeback in front of their home crowd inside FTX Arena.