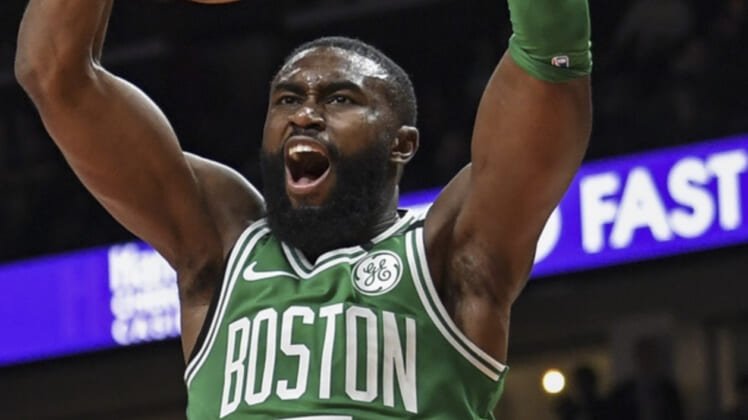 It wouldn’t be an understatement to conclude that some of the NBA’s biggest stars, Boston Celtics guard Jaylen Brown included, are happy that Joe Biden was sworn in as President of the United States on Wednesday.

It’s not a secret that former President Donald Trump had a contentious relationship with the NBA and its players during the embattled politician’s four years residing in the White House.

This came to a head in 2020 following the murder of an unarmed black man by the name of George Floyd be a then-Minneapolis police officer in May.

As the Black Lives Matter movement increased in popularity and related protests took place around the country, the NBA acted as a voice for the movement during its restart at the Walt Disney World bubble in Orlando last summer.

Speaking on this and the transition of power from Trump to Biden, Brown had some interesting takes.

“I don’t want to be pessimistic, but I think now having a new face (in the White House), people are taking their foot off the gas, thinking that everything is okay now,” Brown said Thursday. “I would like to challenge that. We still have a lot of work to do, regardless if Biden is in office or not.”

What might be lost in all of this is that, while, Trump might have acted as a figurehead to those fighting for social justice within the NBA world, systemic racism and inequality is not about one person. Brown spoke to that in a big way.

“My dilemma was never with any presidencies or selections of different faces,” the star guard said. “It’s more about the system, I think, that needs to be changed.”

With that said, the NBA now has someone in the White House who will more than likely work with the league as it continues the fight for social justice.

Starting with Commissioner Adam Silver, the Association has done a lot to help create equality within the United States. Its star players have also been outspoken representatives of the Black Lives Matter movement and continue to get heavily involved in politics. That’s not going to change simply due to Wednesday’s transition of power.

It will be interesting to see how much Jaylen Brown and his fellow NBA stars work with the Biden Administration, the first African-American Vice President Kamala Harris included.