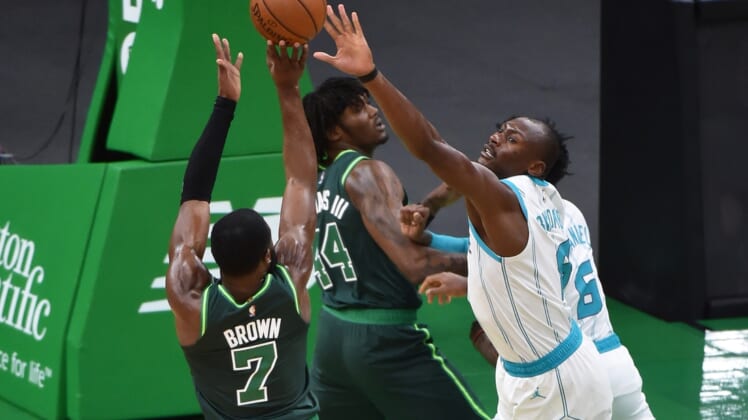 Jaylen Brown’s 38 points and Jayson Tatum’s 35 points propelled the Boston Celtics to a bounce-back 120-111 victory against the visiting Charlotte Hornets on Wednesday night.

The Hornets (30-32) lost their second game in as many nights despite 25 points from Devonte’ Graham. P.J. Washington and Miles Bridges each added 19 points and Cody Zeller, who had been stuck on the bench in recent games, racked up 16 points.

Terry Rozier had another off night for Charlotte, posting nine of his 15 points in the fourth quarter. He was 4-for-18 from the floor, including 1-for-8 on 3-pointers.

Boston had plenty of production in the lane. The rebounding advantage for the Celtics stood at 54-33, highlighted by Thompson. Robert Williams III and Nesmith added nine rebounds each.

Still, it was Brown and Tatum who heated up from long range at times. Brown was 7-for-13 on 3-point attempts and Tatum hit four of 10. Tatum also delivered eight assists.

The Hornets were within 97-93 after trailing by 20 points at the end of the first quarter. Brown scored five of Boston’s next eight points.

By then, Charlotte was in a stretch of more than three minutes without scoring, falling into a 110-98 hole. Tatum had seven straight points for the Celtics down the stretch.

Boston sizzled in the opening quarter in establishing a 39-19 lead, with Brown sinking a pair of 3-pointers in the final minute of the first quarter. Charlotte closed the gap to 58-47 by halftime.

Graham made five 3-pointers for the game, but the Hornets were just 13-for-35 from long range. Overall, Charlotte shot 42.5 percent from the field.