Boston Celtics eke out win over the New York Knicks 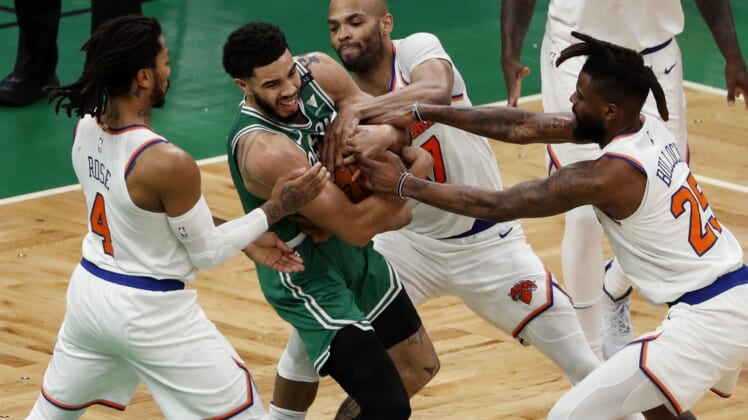 Marcus Smart hit the tiebreaking 3-pointer with 36.4 seconds left Wednesday night, and he scored 14 of his 17 points in the fourth quarter as the host Boston Celtics snapped a seventh-place tie in the Eastern Conference by coming back to beat the New York Knicks 101-99.

Smart was just 1-of-7 from the field before he teamed up with Jaylen Brown (seven points) and Jayson Tatum (seven points) to score the final 28 points for the Celtics, who trailed by seven early in the fourth before winning for the third time in four games to improve to 26-26.

RJ Barrett was 6 of 6 from 3-point range and scored 29 points for the Knicks, who lost for the fifth time in six games. Julius Randle had 22 points and nine rebounds while Derrick Rose added 11 points off the bench.

Neither team led by more than seven in a run-filled game.

Rose and Alec Burks scored all the points for the Knicks in a 7-3 run that opened the fourth and gave New York its second seven-point lead. The Celtics pulled within a possession four times before going ahead on Smart’s wide-open 3-pointer with 4:32 left.

Rose and Randle missed shots on the Knicks’ next possession, and Tatum hit a layup to extend the Celtics’ lead to 89-85. Barrett ended a streak of six straight misses by New York by draining a jumper, but Smart put back a Tatum miss to again give Boston a four-point edge.

Nerlens Noel hit a free throw and Reggie Bullock missed a potential game-tying 3-pointer with 2:04 left before Randle’s dunk off a Bullock steal pulled the Knicks within 91-90. Smart missed a 3-point attempt, but New York turned the ball over, which led to a layup by Brown.

Barrett hit the tying 3-pointer out of a timeout, but Smart responded on the other end. Burks missed a 3-point try before the Celtics iced the win by hitting five of six free throws.