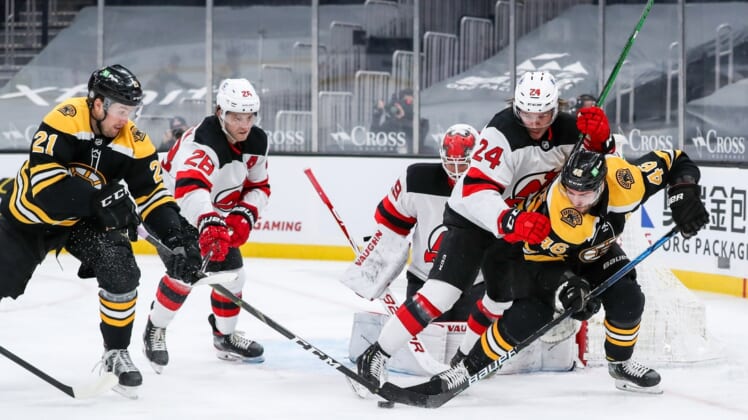 Charlie McAvoy and Matt Grzelcyk scored fewer than six minutes apart to tie the game in the third period Tuesday night, and the host Boston Bruins stormed back for a 5-4 shootout win over the New Jersey Devils.

Nick Ritchie scored in the first period and Brad Marchand scored in the second for the Bruins, who snapped a four-game losing streak against the Devils. Boston is 2-3-1 this season against New Jersey, with all six games decided by one goal.

Halak made 31 saves through regulation and overtime as the fourth-place Bruins increased their lead over the idle Philadelphia Flyers to three points in the race for the final playoff spot in the East.

New Jersey’s Miles Wood and Michael McLeod scored in the first period. Travis Zajac scored his 200th career goal early in the second and Kyle Palmieri added an unassisted goal late in the middle period for the Devils, who have lost three of four (1-2-1). Goalie Mackenzie Blackwood recorded 44 saves.

The Bruins began their comeback when McAvoy put back the rebound of a shot by Craig Smith with 9:38 left in regulation. Boston tied the game with exactly four minutes remaining when Grzelcyk’s shot sailed through traffic in the crease and past Blackwood.

Wood opened the scoring just 1:28 into the first when he scored from point-blank range following a turnover by Jeremy Lauzon. Ritchie’s shot from the right faceoff circle clipped off Blackwood’s glove and into the net for the tying goal at the 5:55 mark.

McLeod beat Halak on a semi-breakaway with 10:26 left in the first before the Devils took their first two-goal lead 3:45 into the second, when Zajac redirected Jesper Bratt’s shot from the blue line.

Marchand briefly pulled the Bruins within one by firing a shot past a sprawling Blackwood on a power play with 4:12 left in the second. However, another turnover by Lauzon deep in the Boston zone resulted in an unassisted goal for Palmieri just 78 seconds later.