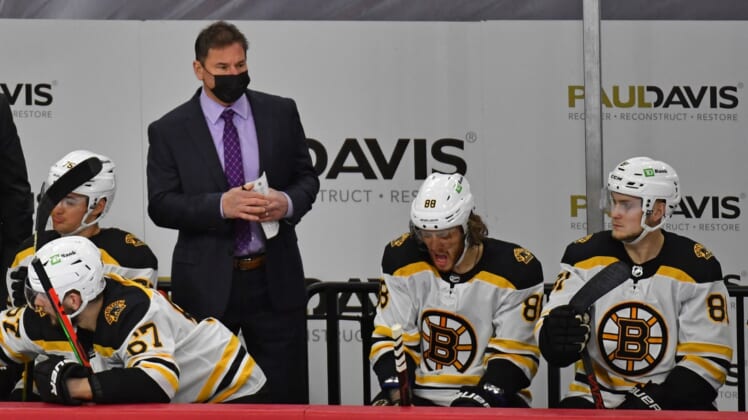 Boston Bruins general manager Don Sweeney said Monday his team is targeting Thursday as a return date from a weeklong shutdown mandated by the NHL amid a COVID-19 outbreak on the team.

The Bruins have had their last two games postponed while five players — David Pastrnak, David Krejci, Sean Kuraly, Jake DeBrusk and Craig Smith — have been in COVID-19 protocol. The team has yet to announce any makeup dates for the contests.

Boston is currently scheduled to host the New York Islanders on Thursday in what is expected to be its first home game of the season with fans in the stands. The plan to allow 12 percent capacity in the building will remain in place if the Bruins do take the ice.

Sweeney said Monday he anticipates the team could be without at least a couple of the players currently in COVID-19 protocol.

“We’re doing everything we can with [testing] to eliminate all the variables you possibly can,” Sweeney said. “But you’re gonna find, and you have found over the course of time, that the virus continues to spread. And then you have to kind of narrow down where it has.

“We’ve done some of that through the tracing and such, and then you just out of an abundance of caution — and you’ve seen it at different times — where teams have had to take a pause. And that’s where we are. We’re in the middle of our pause. Hopefully we’ve contained where we thought the initial test result was, and you go from there.”

The Bruins had won two straight following a 4-7-2 stretch before going on hiatus.