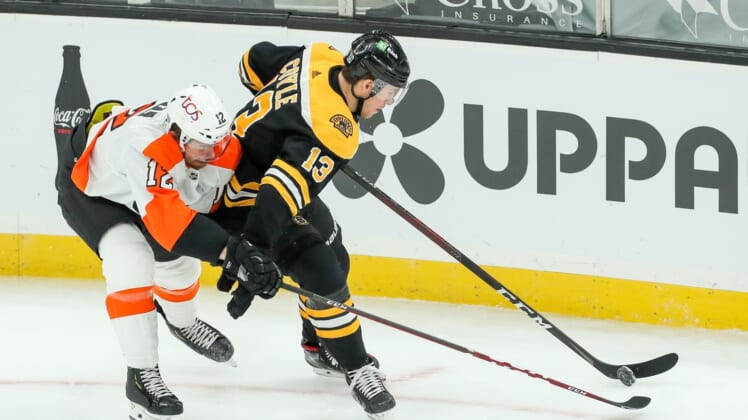 Patrice Bergeron and Brad Marchand each had two goals and one assist to carry the host Boston Bruins past the Philadelphia Flyers, 6-1, on Saturday.

Craig Smith and Charlie Coyle each added one goal and one assist. Nick Ritchie contributed two assists for the Bruins, who swept the two games against Philadelphia.

Kevin Hayes scored the lone goal for the Flyers, who fell 5-4 in a shootout on Thursday.

The Bruins jumped out to a 1-0 lead at 8:09 of the first period when Bergeron scored on the power play.

The Flyers had difficulty generating much offense in the first as they managed only four shots.

Hayes’ goal at 1:14 of the second tied the game at 1. Jakub Voracek received the assist as Hayes deflected the shot past Halak.

Boston responded quickly and regained a 2-1 advantage just 1:16 later when Smith corralled a loose puck in front and tapped it into the net.

Hayes nearly notched his second goal, but Halak made a nifty save to preserve Boston’s one-goal advantage with 2:34 left in the second.

Soon after, the Bruins capitalized for a 3-1 advantage at 17:50 when Coyle barely deflected a shot over Hart’s shoulder.

The Bruins went ahead 4-1 at 4:13 of the third when Marchand scored. Before the goal was scored, the Bruins won a battle for the puck and the hustle ultimately led to a three-goal advantage.

Marchand has registered at least one point in seven consecutive games against the Flyers.

The Flyers did receive their second power play less than a minute later but managed only one shot on goal by Claude Giroux.