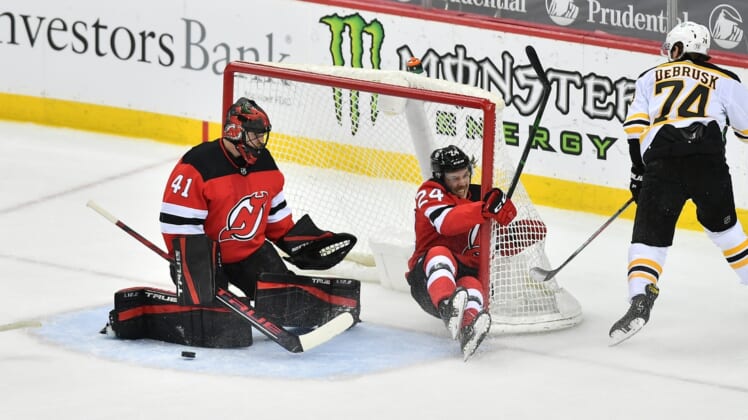 Tuukka Rask stopped all 20 shots he faced Monday night as the Boston Bruins clinched the final playoff spot in the East Division with a 3-0 win over the New Jersey Devils in Newark, N.J.

Nick Ritchie and Patrice Bergeron scored in the second period and Matt Grzelcyk added a goal late in the third for the Bruins (31-14-6, 68 points), who have made the playoffs in each of the last five seasons and in 12 of the past 14 seasons.

The Bruins’ fourth consecutive win, coupled with the New York Islanders’ 4-2 loss to the Buffalo Sabres, vaulted Boston into third place in the East, one point ahead of the Islanders.

The shutout was the second of the season and the second in five starts for Rask, who also blanked the Sabres in a 2-0 win on April 20.

Scott Wedgewood made 39 saves for the Devils (17-28-7, 41 points), whose three-game winning streak was snapped.

The Bruins outshot the Devils 17-4 in a scoreless first period before breaking through in the second.

An end-to-end rush by the Bruins ended with Jakub Zboril passing across the ice to a wide-open Ritchie, who fired a shot from the right faceoff circle that sailed beyond Wedgewood’s glove at the 9:08 mark.

A second effort led to the Bruins’ second goal a little under nine minutes later.

Wedgewood deflected a shot by David Pastrnak before Brad Marchand corralled the rebound. Marchand skated around the net and dished to Bergeron, who was surrounded by five Devils skaters yet still managed to tuck the puck through Wedgewood’s legs with 2:06 left in the middle period.

The Devils had seven of the first nine shots in the third but threatened just once, when Jesper Boqvist’s wrister from point-blank range sailed over the net with 3:27 left.

The Bruins iced the victory 44 seconds later, when Grzelcyk received credit for the goal when his shot from the blue line glanced off Devils defenseman Ryan Murray and fluttered past Wedgewood.