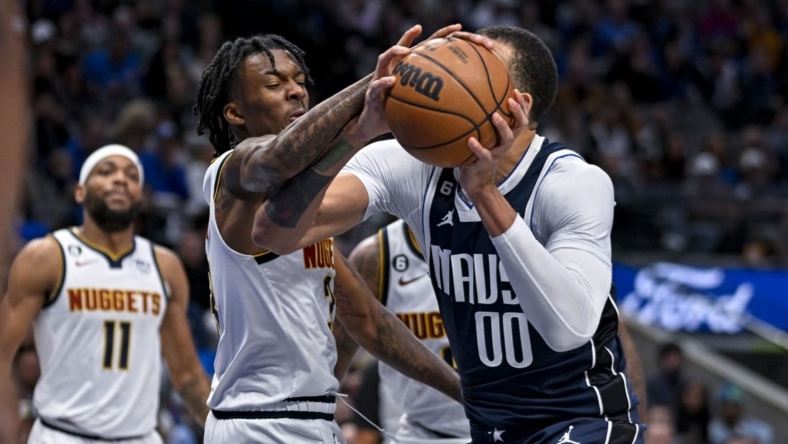 Bones Hyland scored a career-high 29 points, Michael Porter Jr. had 14, including a go-ahead 3-pointer in the final minute, and the visiting Denver Nuggets beat the Mavericks 98-97 on Sunday night to split a pair of games in Dallas.

Bruce Brown scored 12 points and DeAndre Jordan had 17 rebounds for the short-handed Nuggets.

Denver was without Nikola Jokic and Aaron Gordon for the third straight game, and Jamal Murray has missed the last two. Jokic and Murray are in health and safety protocols and Gordon is out with a non-COVID illness.

The Nuggets, routed 127-99 by Dallas on Friday night, came out strong Sunday. They led by as many as seven in the first quarter and by 10 in the second before Dallas rallied to lead by four.

The Mavericks could have led by seven, but Doncic stepped out of bounds on a made 3-pointer and Vlatco Cancar hit a halfcourt shot at the buzzer to make it 56-55 at halftime.

The Mavericks scored the next eight points to get within two, but Hyland’s 3-pointer made it 79-74 heading into the fourth.

Hyland made two free throws and then fed Porter for a 3-pointer and a 98-97 lead with 55 seconds left. Both teams missed, and the Mavericks got possession with 6.3 seconds remaining. After a Nuggets foul, Doncic got the inbounds pass with 3.7 seconds left but missed a 35-footer at the buzzer.