The 2021 season is rolling as NFL Week 6 arrives with some must-see matchups featuring playoff contenders and great players throughout the week.

We’ll see the action kick off on “Thursday Night Football” when quarterback Tom Brady and the Tampa Bay Buccaneers battling the Philadelphia Eagles. We’ll also see an NFL International Series clash between the Miami Dolphins and Jacksonville Jaguars. As for the primetime slate, the Buffalo Bills face the Tennessee Titans on Monday night.

Let’s dive into our bold predictions for NFL Week 6.

Nothing is going right for the Jaguars. Urban Meyer seemed to lose the respect of the locker room before his video incident and the apology, which included pulling rookie Trevor Lawrence into the mess, made things worse. While a loss in London might be the final straw, Lawrence could be the one who saved Meyer.

The Miami Dolphins are expected to have quarterback Tua Tagovailoa back for NFL Week 6, but he’ll likely be rusty coming off injured reserve. We’ve also seen as of late that Miami’s defense can be exploited and Lawrence has the talent to exploit the weaknesses. This figures to be a high-scoring game, but we’ll give the edge to Lawrence coming through on the big stage for a game-winning drive and his first win.

The Dallas Cowboys are one of the hottest teams in the NFL right now. Opponents aren’t having any success stopping Ezekiel Elliott, Tony Pollard nor star Dak Prescott. It’s a credit to the play-calling by offensive coordinator, the elite skill players and a phenomenal offensive line. Now, they face a New England Patriots defense that just made Davis Mills look like a Pro Bowl quarterback. 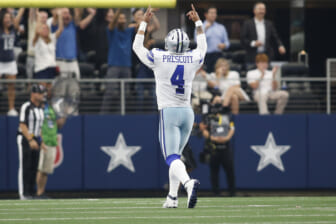 Also Read:
4 reasons why the Dallas Cowboys are a legitimate Super Bowl contender

It’s not like Bill Belichick can take away the one thing the Cowboys’ offense does well. This is a collective unit that just has too many pieces for a defense to contain. On the other side of the ball, Dallas can find a way to generate takeaways. This is a game the Cowboys can control from the jump, leading to a double-digit win.

If you’re looking for a high-scoring game in NFL Week 6, look no further than the Los Angeles Chargers squaring off against the Baltimore Ravens. MVP candidate Justin Herbert will have a chance to attack a thin Ravens’ secondary, peppering Mike Williams and Keenan Allen with targets. But the real mismatch is found on the other side.

The Chargers simply can’t stop the run. Entering Week 5, Los Angeles allowed opponents to average 5.3 yards per carry and 139.5 rushing yards per game. This same defense surrendered 45 rushing yards to Patrick Mahomes and gave up 180-plus total rushing yards twice. Lamar Jackson will do most of the work, but it wouldn’t be a huge surprise if the Ravens’ backfield combined for 200 rushing yards.

Obviously, NFL teams never want to be forced into starting their backup quarterback. But there’s a reason the Seattle Seahawks wanted to bring back Geno Smith this offseason. Coming off the bench without any practice reps is never easy, but Smith exceeded expectations in a bad situation and nearly led Seattle to a Week 5 comeback.

There’s an area of weakness for the Seahawks to attack. Cornerbacks James Pierre (116.7 passer rating allowed) and Joe Haden (117.5 passer rating allowed) don’t match up well against D.K. Metcalf. The Seahawks just need to get Metcalf and Tyler Lockett open in space and Smith will make the throws. As long as Smith avoids a game-changing mistake, he can beat Ben Roethlisberger and the Steelers.

Enter All-Pro quarterback Josh Allen. Buffalo’s receiving corps is deeper than last season, meaning offensive coordinator Brian Daboll can draw up all kinds of route combinations to torch the Titans. On the primetime “Monday Night Football” stage, look for Allen to leap into the NFL MVP conversation with a performance that will have everyone talking.