3 bold predictions for the Indianapolis Colts for Week 12 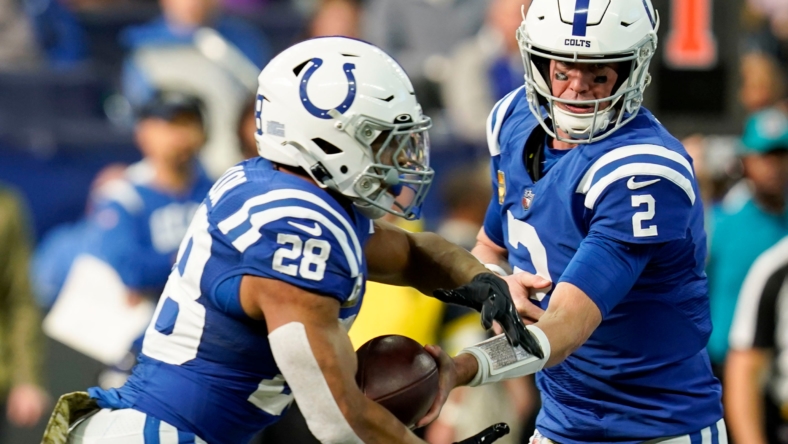 The Indianapolis Colts are coming off a crushing loss to Philadelphia. This week the Colts host Pittsburgh. Neither team has been very good this season. The Colts are 4-6-1 on the season. Meanwhile, Pittsburgh is 3-7, and they are starting their rookie quarterback Kenny Pickett.

The Colts will look to get another win on Monday Night Football. This game profiles as a matchup that will most likely be watched only by the fans of both teams. Neither team is very appealing or offers the potential to be entertaining. It took a lot of brain power to come up with three bold predictions for the game, but we did it.

As previously mentioned, neither team is very good. In fact, the strengths of both teams are their defenses. Both offenses rank 28th (Colts) and 29th (Pittsburgh), respectively. The game plan for both teams will be to run the ball early and often, not commit any turnovers, play a battle-of-field position, and play stout defense.

Indianapolis’s defense is ranked 14th in the NFL, while Pittsburgh’s is ranked 24th. So, how is Pittsburgh going to play stout defense against the Colts? By attacking the Colts’ bad offensive line. T.J. Watt and his teammates along the defensive line are licking their chops, knowing that this Colts’ offensive line has been terrible.

This game may be low scoring because Matt Ryan and the offense don’t have enough time to complete a pass. Or Jonathan Taylor has no open lanes to run through. On the other side, the Colts’ defense will take advantage of Pickett’s inexperience and Pittsburgh’s bad offensive line. From an entertainment standpoint, this game projects to be a snooze fest.

The rookie left tackle has his best game

Rookie third-round pick Bernhard Raimann has had a very trying season. He’s made a couple of starts, and his play has reminded us he’s still just a first-year pro in both of them. Currently, he’s a much better run blocker than he is a pass blocker.

Raimann is routinely beat on speed or bull rushes, as he doesn’t do a good job of anchoring. Pittsburgh offers a couple of good pass rushers, the previously mentioned Watt and Alex Highsmith, who has nine sacks this season. Raimann will get some help at times, but most likely, he will be left on his own.

The only reason to expect Raimann to have a good game is that Jeff Saturday is the head coach. And since he’s been the head coach, the offensive line’s play has been a bit better. You can expect that Saturday has really been working with the offensive line on improving their technique. This week fans get to see a glimpse into Raimann’s future with a strong effort.

It’s been said many times, in many ways, that the Colts’ defense is the strength of this team. They are one of the better units at getting after the quarterback while not having a dominant rusher. And they have one of the top corners in the league, Stephon Gilmore.

The other side of the field’s cornerback is where opponents have attacked and found success. That is until Isaiah Rodgers started to see the field more frequently. Since he’s been getting more playing time, the pass defense has improved. Also, his play has been improving, watch him battle Davante Adams.

Since Pittsburgh is starting Pickett, who has three touchdowns to eight interceptions, it would not be surprising to see Rodgers or Gilmore get an interception. For all you gamblers, we’ll lean more likely toward Rodgers getting the pick, and if he gets a hold of one, don’t be shocked if he turns it into a pick-six.

This game will be ugly, so be sure you have plenty of sleep or a cup of coffee to drink while watching it. This matchup could very well be a disaster. The question is, who is it a disaster for, Pittsburgh or Indianapolis?