Bold predictions for the 2020 NFL offseason 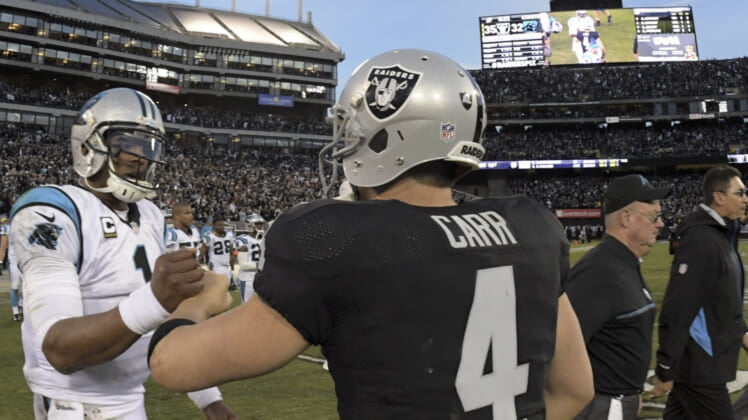 The NFL offseason rumor mill is already spinning as teams converge on Indianapolis for the league’s scouting combine this week.

Free agency will get going in about three weeks. Trades will once again be a common theme. Down the road, the league will take to Las Vegas for the 2020 NFL Draft.

The backdrop here is multiple top-end quarterbacks likely hitting the open market with over half the NFL boasting $50-plus million in cap room. The top of the 2020 NFL Draft could also be really intriguing while the trade market is seemingly filled with riches.

Taking an unconventional approach in looking at the NFL offseason, here are 10 bold predictions.

Bengals trade down from one

It seems to be a foregone conclusion that the Bengals are going to select reigning Heisman winner, quarterback Joe Burrow, No. 1 overall in April. That’s unless the team gets a “Godfather” offer for the stud signal caller.

I’m here to boldly predict that’s exactly what is going to happen. Looking very much like a team willing to go all in this offseason, the Carolina Panthers will offer up the house to Cincinnati for Burrow.

He worked with current Panthers offensive coordinator Joe Brady at LSU and would be a perfect fit under first-year head coach Matt Rhule. Carolina offers up its first-round pick this year and next year as well as a lot of change to land Burrow in a shocking trade up.

Recent rumors around the NFL suggest that it’s now more likely than not that this six-time Super Bowl champ leaves the New England Patriots after two decades of domination. It would be quite the sight. One of the game’s best ever playing on another team.

With that in mind, Brady will ultimately take up the Las Vegas Raiders’ impending two-year, $60 million offer to become the face of the franchise as they relocate to the desert metropolis.

Adding even more fuel to this, I’m going to predict that future Hall of Fame tight end Rob Gronkowksi comes out of retirement to join Brady and Jon Gruden in Vegas. How awesome would that be?

The Cleveland Browns continue to say the right things publicly. They envision OBJ as part of their future following a dismal 2019 season for both the Pro Bowl receiver and his team. It’s the same stance that the New York Giants took last year around this time, mere weeks before dealing Beckham Jr.

It’s going to happen again. Beckham Jr. is a stud of a receiver. He simply has not fit in well with the Browns. I don’t envision that changing at any point in the near future.

If so, Cleveland would be smart to trade OBJ while he still has a nice amount of value. Teams like the New England Patriots, Green Bay Packers, San Francisco 49ers and Seattle Seahawks all make perfect sense.

Even if New England loses Brady in free agency, I don’t envision the 67-year-old Bill Belichick blowing everything up as he enters the twilight of his career. There’s going to be no rebuild in New England. Instead, the team will retool on the fly.

If that is indeed the case, it makes perfect sense for the Pats to target former NFL MVP Cam Newton in a trade with the Carolina Panthers. Despite their public stance to the contrary, the Panthers are going to trade Newton at some point soon.

Yielding a second-round pick or a combination of mid-round picks for Newton would enable New England to remain relevant in a vastly changing AFC. It would also put Belichick’s ego to the test. Can he have success without Brady under center? We’re sure to find out soon enough.

Entering the final year of his rookie deal, there’s a decent chance Kamara will decide to holdout if the Saints don’t give him a long-term deal near the top of the running back market. The electric 24-year-old back is playing for pennies on the dollar after putting up nearly 4,500 total yards and 43 touchdowns in his first three NFL seasons.

With that said, New Orleans did not utilize Kamara at the clip we expected this past season. He put up just 171 rush attempts in 14 games. Is that indicative of Sean Payton and Co. actually handing him a near record-breaking deal? I’m not too sure.

It makes sense for the Saints to seriously consider moving Kamara while his value is at an all-time high. The team could net valuable draft pick assets and a potential proven player at a position of need. In turn, New Orleans looks to the draft for another cheaper running back. Pure conjecture here, but a team like the Indianapolis Colts could make a ton of sense.

It’s not a matter of if, but when. Coming off a Super Bowl MVP and the best two-year stretch in the modern history of the NFL, Mahomes is eligible for an extension for the first time in his career. It could not come at a better time for the game’s most-explosive and best all-around quarterback.

We’ve read the suggestions that Kansas City will find a way to extend Mahomes at some point after April’s draft. I firmly believe that it will happen long before that, potentially once free agency starts around the NFL on March 18 and the new collective bargaining agreement is officially signed.

Look for Mahomes to net $250 million on five-year contract, paying him an otherworldly $50 million on an annual basis. In turn, Kansas City will push some of that lofty cap number back to the latter years of the contract to take into account a heightened cap total based on a potentially record-breaking NFL television contract. It just makes too much sense.

Given the pace of contract talks with Pro Bowl quarterback Dak Prescott, it almost seems to be a foregone conclusion that the Cowboys are going to let this stud receiver test the open market. Short of a Prescott deal getting done ahead of free agency, Dallas will place the franchise tag on the signal caller before the March 12 deadline.

This obviously means that Cooper will hit a market that’s not ripe with wide receiver talent. It’s also a market that sees over half of the NFL with $50-plus million in cap room. In short, he could price himself out of Dallas.

Of the teams with the most cap room, the Buffalo Bills, New York Giants, Denver Broncos and Seattle Seahawks could all make sense for Cooper. With that said, a dude who is averaging 77 receptions for almost 1,100 yards over the past two seasons is not going to see a limited market. That would impact Dallas big time if he’s not taken care of before March 18.

It’s already been reported multiple times that Chicago is looking for an established veteran quarterback to compete with the struggling Mitchell Trubisky this coming season. Most of the focus has been on both Andy Dalton and Derek Carr.

I’m going in a different direction here. Chicago might believe Trubisky can emerge into a franchise quarterback. It’s just not happening any time soon. Currently in win-now mode with a championship-caliber defense, the time is now to make a play for a legit starter.

Despite his struggles last season with the Los Angeles Chargers, the 38-year-old Rivers fits this definition to a T. Here’s a dude who averaged 4,400 yards with 30 touchdowns and 11 interceptions in the two seasons prior to the 2019 campaign. Those numbers would represent the best in Bears history. Don’t overthink this.

Washington made news earlier this week when it noted that the team is visiting with top quarterbacks Joe Burrow and Tua Tagovailoa. Selecting No. 2 overall, it makes sense for head coach Ron Rivera and Co. to do their due diligence.

Even then, there’s suggestions that the Redskkins’ new brass is not sold on Haskins. He was pretty much hand-picked by former team president Bruce Allen. Rivera has no built-in relationship with the former top-15 pick.

That’s where this bold prediction comes into play. Washington ultimately gives Haskins the Josh Rosen treatment and trades him after one year. The end result could either be Washington selecting a quarterback No. 2 overall or hitting the free-agent market for an immediate starter. A trade for Rivera’s former quarterback in Carolina, Cam Newton, could also make sense.

Steelers trade up for quarterback

Pittsburgh received some good news following a non-playoff season. Ben Roethlisberger appears to be in line to return Week 1 after missing all but two games last season with an elbow injury.

The bad news? These Steelers can’t rely on the likes of Devlin Hodges and Mason Rudolph under center should the aging Big Ben suffer another damaging injury.

It’s in this that I boldly predict that the Steelers, currently without a first-round pick, will trade up into the late first round for a potential heir apparent to Roethlisberger. The 6-foot-6 Jacob Eason makes sense as that prototypical quarterback Mike Tomlin and Co. have coveted in the past.