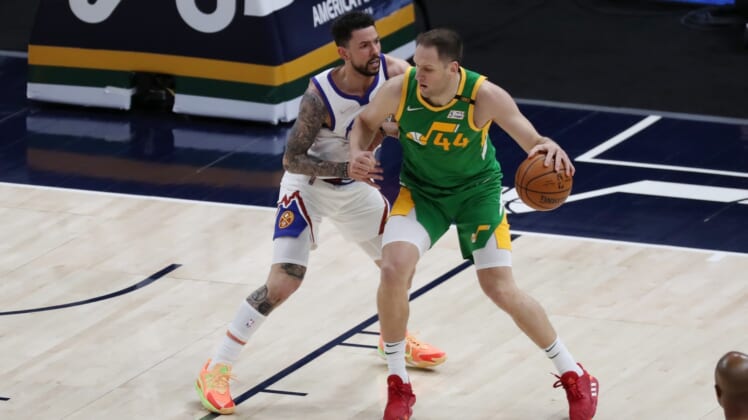 The Jazz came out strong to start the fourth quarter. Niang made an 8-footer and a 3-pointer to go in front, and after two free throws by Porter, Bogdanovic made two more from deep to give Utah a 109-103 lead.

Rivers’ 3-pointer cut the deficit to three, but a dunk by Gobert and Bogdanovic’s eighth 3-pointer increased the lead to 114-106 with 4:39 remaining.

Denver scored the next five points out of a timeout to get within three. Clarkson hit a 3-pointer and Gobert a layup to make it 119-112.

The Nuggets got within three with a minute left but Clarkson’s sixth 3-pointer ended the comeback attempt.

Both teams cooled off after a scorching first half, and things stayed close throughout the third quarter. Utah took a 78-77 lead on two free throws from Bogdanovic but Millsap made two foul shots and Porter hit a 25-footer to give the Nuggets a four-point lead.

The Jazz again went ahead by one but Rivers hit two 3-pointers to put Denver back up by five. After Utah retook the lead, Jokic made two free throws with 1.5 seconds left in the third to give the Nuggets a 99-98 lead heading into the fourth.