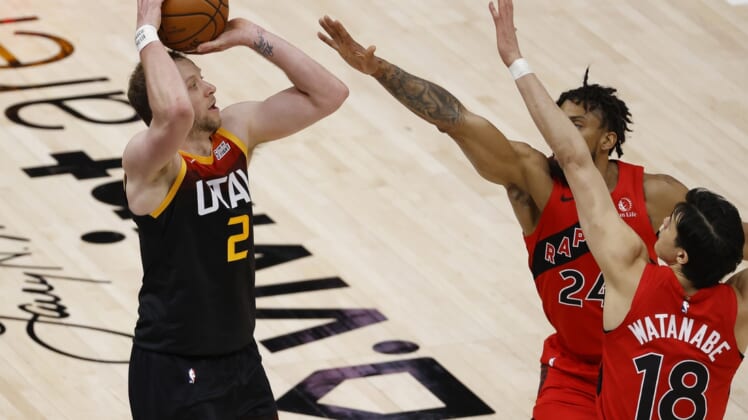 Bojan Bogdanovic scored 34 points, Rudy Gobert had a double-double and a couple of key late buckets, and the short-handed Utah Jazz regained the top spot in the NBA with a 106-102 win over the visiting Toronto Raptors on Saturday in Salt Lake City.

The Jazz announced earlier in the day that Mitchell will miss another week of action and will be re-evaluated next weekend.

Joe Ingles added 15 points with nine assists for Utah, Jordan Clarkson contributed 15 points off the bench, including a spectacular dunk over Toronto’s Freddie Gillespie, and Royce O’Neale hit a go-ahead 3 midway through the fourth and finished with nine points and 10 rebounds.

Utah now has a slim half-game lead over resting Phoenix, which begins a three-game road trip in Oklahoma City on Sunday. This game marked the first of five straight home contests for the Jazz.

Fred VanVleet scored 30 to lead Toronto (26-38), which is hoping to earn a spot in the play-in tournament. The Raptors were without Kyle Lowry, who took the night off to rest.

All five starters scored in double figures for the Raptors, who led by as many as 10 but then managed to only score 13 in the fourth quarter.

The Jazz also got some key contributions from rookie Trent Forrest, who had seven points, including a 3-pointer that came seconds after he blocked a shot on the other end to give Utah a 98-93 lead midway through the final quarter.

The Jazz trailed 64-56 early in the third quarter and used a 7-0 run to pull within one before surging ahead in the fourth quarter thanks to a stifling defensive effort.

The Raptors finished shooting 44.7 percent, including 12 of 33 from 3-point range.

Utah struggled with turnovers, committing 21 — tied for second most in any game this season for the Jazz. But 17-for-41 shooting from beyond the arc and 47.4 percent shooting overall helped Utah overcome that sloppiness on the tail end of a back-to-back.