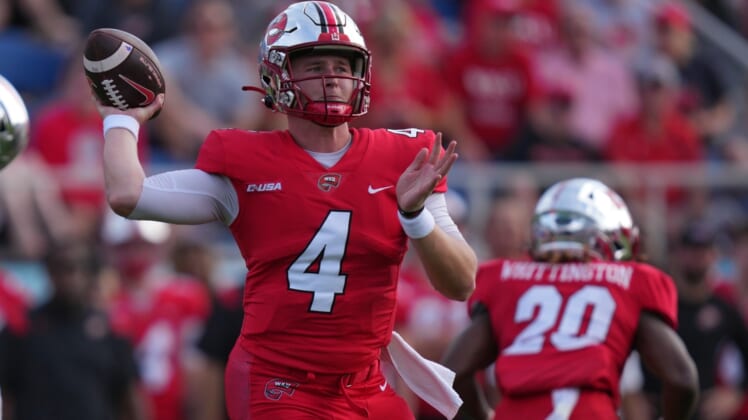 Bailey Zappe threw for six touchdowns on a record-setting day as Western Kentucky wasn’t stopped often in a 59-38 victory against Appalachian State in the Boca Raton Bowl on Saturday in Boca Raton, Fla.

Zappe threw for 422 yards by completing 33 of 47 passes without an interception.

Jerreth Sterns caught three of the TD passes on his way to 13 catches for 184 yards. Mitchell Tinsley racked up 103 receiving yards on seven catches, with two resulting in touchdowns.

The Hilltoppers (9-5) also received 150 rushing yards on seven carries from Noah Whittington, who scored one touchdown.

Appalachian State (10-4) lost in a bowl game for the first time despite four touchdown throws from Chase Brice. He threw for 317 yards and was intercepted once.

Both teams compiled more than 600 yards of total offense, with Western Kentucky at 637 and Appalachian State at 609.

The Mountaineers held a 21-17 lead in the second quarter. Zappe threw two touchdown passes in the last seven minutes of the first half as Western Kentucky led 31-24 at the break.

Whittington’s 86-yard run opened the second-half scoring, and Zappe threw 2 yards to Tinsley as the margin grew to 45-24 with less than six minutes to play in the third quarter.

If there were snags for the Hilltoppers, they came with having to punt three times and missing a field goal.

Appalachian State was in a bowl for the seventh consecutive season since rising from the Football Championship Subdivision. The Mountaineers are 6-1 now.

Western Kentucky was in its eighth bowl in a 10-year span, improving to 5-3 in those games.