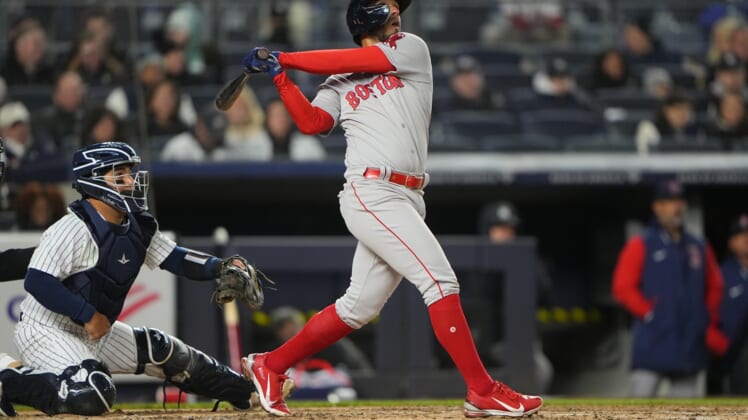 Bobby Dalbec hit a tiebreaking homer to open the sixth inning and the Boston Red Sox avoided an 0-3 start with a 4-3 victory over the New York Yankees Sunday night at Yankee Stadium.

The Red Sox avoided their second straight 0-3 start after blowing leads in the first two games of the series.

Dalbec snapped a 3-all tie when he drove the first pitch of the sixth off Clarke Schmidt (0-1) into the right-center field seats.

Giancarlo Stanton had three hits, including an RBI single after homering in the first two games and Anthony Rizzo hit a two-run single but the Yankees stranded 11 and put the leadoff man on in six innings.

Boston’s Tanner Houck worked out of trouble at times and allowed three runs on six hits in 3 1/3 innings. He struck out three, walked three and threw 78 pitches before Ryan Brasier allowed Rizzo’s single.

Houck exited after fanning Josh Donaldson. Rizzo followed with a two-run single to center off Brasier, who ended the fourth by getting Aaron Judge to bounce into a double play.

Jake Diekman fanned Judge, Stanton and Joey Gallo in a scoreless ninth for his first save. He needed 11 pitches to get Judge on a foul tip before quickly getting the final two outs.

New York starter Jordan Montgomery withstood getting hit in the back of the leg by Xander Bogaerts’ single three batters in and allowed three runs on four hits in 3 1/3 innings. He struck out four, walked one and threw 58 pitches.

Martinez was 1-for-18 off Montgomery until his RBI double to left scored Rafael Devers for Boston’s first run. Bogaerts scored the second run when he trotted home on Arroyo’s sacrifice fly to right field.

The Yankees had players on first and second when Stanton lined an RBI single to left in the third and the Red Sox took a 3-1 lead when Arroyo scored on Arauz’s fly ball.