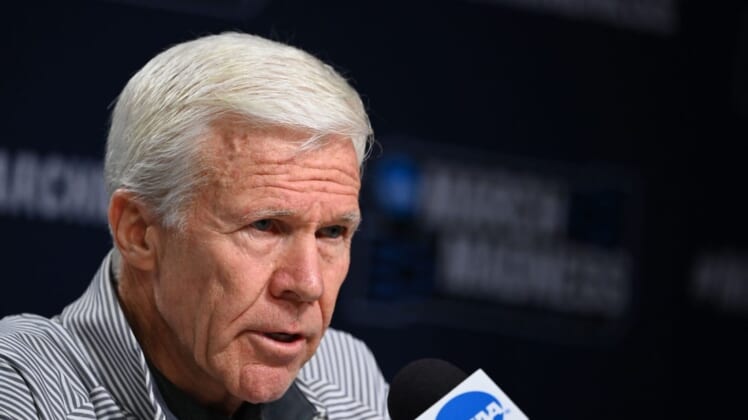 Bob McKillop attempted to choke back tears on Friday as he announced his retirement following 33 seasons as head coach of Davidson.

McKillop, 71, announced the news one day after the program’s most recognizable player, Stephen Curry, led the Golden State Warriors to their fourth NBA title in the last eight years. Curry was named the NBA Finals MVP after the Warriors defeated the Boston Celtics in six games.

“Did you see Steph after the game last night?” McKillop said. “He was crying. Crying. Tears. I thought that was a message to me that it was OK to cry today. I read one time that tears are a gift from God. Tears show that your heart can be touched. I think you know how my heart has been touched by Davidson.”

Curry’s No. 30 jersey will be the first number retired by the school, athletic director Chris Clunie said Friday.

Curry honored his coach over social media on Friday.

“Love you Coach! Thank you for everything you’ve done for me, my family, Davidson and every person you’ve impacted along the way,” Curry wrote on Twitter.

Love you Coach! Thank you for everything you’ve done for me, my family, Davidson and every person you’ve impacted along the way. #TCC #greatdaytobeawildcat https://t.co/hG266yUyst

McKillop tied the school record with 29 wins during the 2007-08 season in which Davidson, led by Curry, became March Madness darlings during the 2008 NCAA Tournament.

The Wildcats defeated Gonzaga, Georgetown and Wisconsin and then played Kansas for a spot in the Final Four.

But Davidson lost 59-57 to the Jayhawks, who went on to win the national title. Curry averaged 32 points in the four games, with a high of 40 against Gonzaga.

He will be succeeded by his son, associate head coach Matt McKillop, who has spent the past 14 seasons on the Wildcats’ staff following a four-year playing career under his father.

“We did our due diligence, and after that process it only validated what we already knew,” Clunie said. “There was no better person primed take Davidson basketball to the next level.”

Bob McKillop led the Wildcats to a 27-7 record in 2021-22, their second-most wins in a single season. They dropped a 74-73 decision to Michigan State in the first round of the NCAA Tournament.

McKillop was named the conference coach of the year on 11 occasions. He received the Atlantic-10 honor following the 2021-22 campaign.

The school named its court after Bob McKillop in 2014.