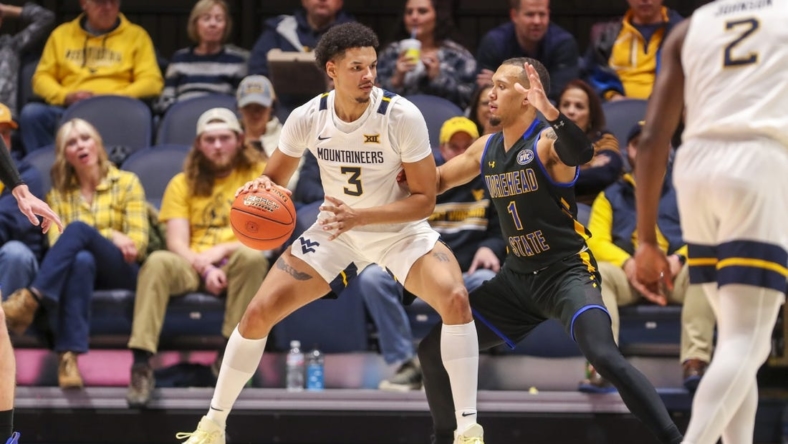 Tre Mitchell scored 21 points, Mohamed Wague and Jimmy Bell Jr. had 10 points each and West Virginia stayed perfect on the early season with a 75-57 victory Tuesday over Morehead State at Morgantown, W.Va.

West Virginia’s defense forced 20 turnovers and turned them into 32 points as head coach Bob Huggins won his 919th career game at the Division I level, one behind Jim Calhoun for third place all-time. Morehead State had just nine points off 10 turnovers.

Alex Gross scored 12 points and Mark Freeman added 10 for the Eagles. Jake Wolfe, who led Morehead State with 14 points in a victory Saturday over Bellarmine, was held scoreless on 0-of-2 shooting in 26 minutes.

West Virginia took command with a 16-3 run that started with a pair of free throws from Mitchell with 16:37 remaining. The Mountaineers closed the run on a 3-pointer from Erik Stevenson off an Eagles turnover for a 56-35 advantage.

The three points Morehead State managed to score in West Virginia’s decisive run came on a 3-pointer from Tucson Redding, the Eagles’ first basket from distance in the game. Morehead State finished 4 of 15 (26.7 percent) from 3-point range.

In a tight first half, the Mountaineers led 27-26 with 3:14 left before the break then went on a 10-2 run to head into halftime with a 37-28 advantage. The nine-point advantage, which came on a driving layup from Mitchell with four seconds remaining, was West Virginia’s largest of the first half.