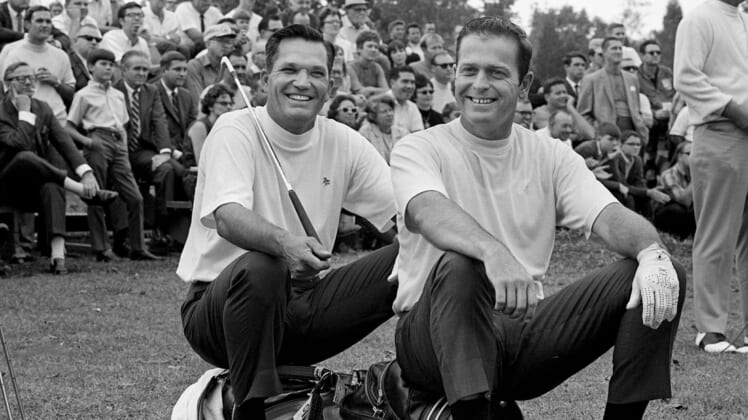 Master Champion Bob Goalby, left, and Bobby Nichols enjoy one of the many light moments, a free golf clinic, of the pre-Music City U.S.A. Pro-Celebrity Golf tournament Oct. 11, 1968 at the Harpeth Hills golf course. The clinic featured the tour pros demonstrating the proper use of every club in the bag.68 Music City Golf 17

Bob Goalby, winner of the 1968 Masters and a founding force behind the PGA Tour Champions, has died at age 92.

His death Wednesday in Belleville, Ill., was confirmed by the PGA Tour. He was an 11-time winner on the tour and earned just over $645,000 for his career.

Goalby began playing golf as a child and after high school, he was drafted into the Army in 1950. After his military commitment, he started playing professionally and was named the tour’s rookie of the year in 1958.

He is best remembered for what happened 10 years later in Augusta, Ga., at the Masters. On the back nine of the final round, he birdied two holes and made an eagle at No. 15 to finish with a 66 on the day and an 11-under 277 for the tournament.

When Roberto De Vicenzo of Argentina signed an incorrect scorecard that mistakenly put him a stroke behind Goalby instead of into a tie and a playoff round, Goalby won the green jacket.

“The presentation ceremony wasn’t what it could have been,” Goalby told Golf Digest in a 2018 interview. “I sat next to Roberto and did what I could to console him. There’s video of me patting him on the leg. I felt no elation, nothing like you’d expect from winning the biggest tournament of your life. It was awkward. It was tragic for Roberto, but it was equally unfortunate for me.

“I never did get full credit for what I’d done. I played damned well, especially the last day.”

Goalby wound up receiving hate mail, he once said, but played in the tournament annually until 1986.

He also worked for NBC sSports as part of its golf broadcast team and was part of a group that pushed for the formation of a tour for players age 50 and older. The PGA Tour Champions, as it is now known, was created in 1980.